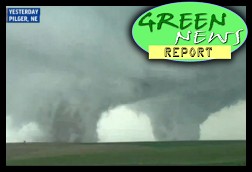 « PREVIOUS STORY "BOMBSHELL: Capture of Alleged Benghazi Attack Ringleader NOT a 'BOMBSHELL' at Fox 'News'"
» Go to The BRAD BLOG front page «
"Dick Cheney on Obama: 'Rarely Has a U.S. President Been So Wrong At Expense of So Many'" NEXT STORY »

According to the reputable meteorologist Jeff Masters who says that twin tornadoes are "extremely rare," links to a paper by Tetsuya Fujita (where we got the "F" in the tornado "EF scales") , notes an event from 1965 that apparently involved twin tornadoes (just a niggling nitpick).

Bitchin' broadcast, by the way.

Jim --- the 'never beefore seen' was said by the MNSBC meteorologist in our report, who had apparently never seen such a thing before, and didn't know any meteorologist who had.

This may be why: at the end of Dr. Masters' excellent post, he clarifies that the 1965 tornado event was likely not the same as Monday's twin tornadoes...

The twin tornadoes in this image [1965] were probably not two separate tornadoes, but rather one multi-vortex tornado with two impressively large funnels. Here is a paper by Fujita et al. on the 1965 Palm Sunday outbreak, including a detailed analysis of the twin tornadoes in the photograph: http://docs.lib.noaa.gov.../098/mwr-098-01-0029.pdf. Unlike the Pilger twin tornadoes, the 1965 twin was a single tornado which broke down into two circulations.

Got it, thanks. I misread the text under the 1965 photo to mean it was other than the actual twin, which he said was observed to be separated by 2 1/2 miles. When Jeff says "rare" it means just what you said, 'never before seen.' Duh. Sorry to waste your time, but at least you got to go to Jeff Masters' Wunderblog.

The Supreme Court Five conservatives weakened the EPA in the first of five cases before it involving the EPA (Bad Timing).

Climate Scientist Michael Mann has sued some deniers for libel (Oil-Qaeda: The Indictment - 3).

« PREVIOUS STORY "BOMBSHELL: Capture of Alleged Benghazi Attack Ringleader NOT a 'BOMBSHELL' at Fox 'News'"
» Go to The BRAD BLOG front page «
"Dick Cheney on Obama: 'Rarely Has a U.S. President Been So Wrong At Expense of So Many'" NEXT STORY »
See MSVL and support BRAD BLOG! Click here for signed premium version!