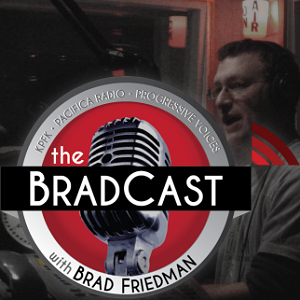 The BradCast
with Brad Friedman

I was so busy this week, I failed to post my Wednesday show on KPFK/Pacifica Radio here in Los Angeles. This week, I covered the latest news in the revelations about the U.S. Chamber of Commerce plot to use tools developed for the "War on Terror" to target progressive organizations, citizens and journalists (including yours truly and my family) here in the U.S., with an attempted smear campaign to discredit by planting fraudulent documents, infiltrating with "fake personas" via social media, and employing cyber-snooping tactics against the Chamber's perceived political enemies.

The show includes parts of my interview from Monday's Mike Malloy Show with Congressman Hank Johnson (D, GA-4) who is leading an effort in Congress to try and bring some accountability to the conspirators in the proposed $12 million plot hatched for the U.S. Chamber, the world's most powerful Rightwing lobbying group, their law firm Hunton & Williams, one of the nation's largest and most powerful, and three U.S. government contracted cyber-security, intelligence and data firms, HBGary Federal, Palantir Technologies and Berico Technologies.

P.S. Still looking for a name for this weekly Wednesday, half-hour, usually-live show heard at 3:30pm PT each week on air in Southern California and around the world via KPFK.org. Got any suggestions?

P.P.S. Here's the podcast RSS feed for the Wednesday KPFK show, in case you wish to subscribe (for free) and get notified about new archives sooner than I'm sometimes able to do here!

Today on my Wednesday show on KPFK (L.A.'s Pacifica Radio affiliate) we covered - guess what?! --- the latest news on the Fukushima Daiichi nuclear disaster. Desi Doyen, my partner on the Green News Report, joins me for the latest.

Also, a very few minutes (never enough time on a 30 minute show --- have to figure out how to do these!) on Diebold's touch-screen machines now being sold for pennies on the dollar at eBay, just in time for 2012, and a bit on the latest Republican voter fraud criminal, potential 2012 Presidential contender Jon Huntsman, Jr. of Utah.

P.S. I should probably come up with a name for this show. Anybody have any good ideas?

P.P.S. It's no April Fools Joke! I'll be guest-hosting the nationally syndicated Mike Malloy Show again for a week starting this Friday, weeknights through next Friday (4/1 - 4/8). We'll be running our live chat rooms right here each night while the show is live from 6pm - 9pm PT (9pm - Mid ET), so please stop on by and say hey!. We'll also have links to live listening streams right here if you're not lucky enough to get Mike's show on the public airwaves where you live! Don't miss one thrilling episode!

Today on my show on KPFK (L.A.'s Pacifica Radio affiliate), we covered the latest news out of Japan's Fukushima Daiichi nuclear crisis, recent setbacks, and the reports of radioactive iodine at dangerous levels to infants now discovered in Tokyo.

We followed on The BRAD BLOG's earlier report today, updated with new details from Desi Doyen in studio, and then live from Tokyo in an interview with Voice of America's VOA News' Northeast Asia Bureau Chief, Steve Herman.

Herman, who has been reporting from the Fukushima prefecture and in Tokyo since the March 11 quake and tsunami, brings us up to date with the latest on Friday morning in Japan: including news on "panic" buying of water in Tokyo; reports of "neutron beams" --- yes, "neutron beams" --- seen near the crippled power plant, as indications that nuclear fission may be occurring within the damaged fuel rods at one or more of the reactors; the often slow, sometimes contradictory information being given by the Japanese government and Tokyo Electric Power Co. (TEPCO), and whether it is to be trusted; and the way Japanese citizens from Fukushima to Tokyo are handling all of the "fallout" in the wake of this extraordinary, and ongoing disaster.

NOTE: If you missed my KPFK interview last week with BBC journalist Greg Palast on TEPCO's plan to build two new nuclear reactors on the Gulf Coast of Texas, it's right here...

The first photos of the so-called "Fukushima Fift,y, the "anonymous band of lower and mid-level managers" (as described by the Daily Mail today in their photo essay) who stayed at the crippled Fukushima Daiichi plant last week, as the rest of the workers were evacuated when radiation had reached record levels there, have now been published by AP.

"Despite sweltering heat from the damaged reactors, they must work in protective bodysuits to protect their skin from the poisonous radioactive particles that fill the air around them," the Daily Mail writes, in its heartbreaking piece, "But as more radiation seeps into the atmosphere minute by minute, they know this job will be their last."

Workers were again evacuated from the Fukushima reactors 3 and 4 late on Thursday (late Wednesday US time), after black smoke once again began to emanate from Unit 3, where a dangerous mix of both uranium and plutonium fuel the reactor, as well as sit in largely unprotected spent fuel ponds in the same damaged building. The roof and walls were blown off of Unit 3 last week after venting of radioactive steam in the reactor led to a hydrogen explosion.

News reports today say that the black smoke, the cause of which is still unknown, has dissipated a bit at Unit 3, and this quick summary of the reactors' status at Fukushima (March 23, 20:00 UTC) from the International Atomic Energy Agency (IAEA) --- which has not always been as up to date as some of the actual news sources on the ground --- suggests workers have now returned to the plant.

"Crews continued today to use a concrete pump truck to deliver high volumes of water into the Unit 4 spent fuel pool, where there are concerns of inadequate water coverage over the fuel assemblies," according to the IAEA.

The biggest news last night was the announcement by the Tokyo Metropolitan Government that radioactive iodine levels in the city's municipal tap water has now increased to levels that are no longer safe for infants. That, according to VOA News' Steve Herman latest report (as well as other sources in Tokyo), has led to a "panic" and a run on bottled water at stores, many of which have now run out entirely.

City officials say the affected downtown facility supplies much of the tap water for Japan's capital and five suburban districts. They say the level recorded in the water, drawn from local rivers, is nearly double that considered safe for infants to drink, but still within limits acceptable for adults to ingest.
...
The announcement immediately prompted panic. Citizens began buying huge amounts of bottled water in Tokyo, with some purchasing it by the boxes.

Japan's government quickly asked the public to refrain from excessive purchases of water and said it is looking at ways to provide pure water to families with infants in the Tokyo Metropolitan area.

Beyond that, despite those setbacks at this hour, the status at the Fukushima Daiichi plant seems to be largely in the same place as it was during our previous update yesterday, as lights are slowly coming back on at the various units now that power has been restored to all of them from the grid. But pumping and cooling equipment continues to be malfunctioning in all but the 5 and 6 units at the plant, so work continues to pump water in hopes of keeping down temperatures and radiation at Units 1 to 4.

NOTE: We will be interviewing, Voice of America's Northeast Asia Bureau Chief Steve Herman --- who has been in both the Fukushima prefecture and Tokyo over the past 13 days since Japan's 9.0 earthquake and ensuing tsunami --- on the latest news out of Fukushima and Tokyo, later today during our show on Los Angeles' Pacifica Radio affiliate, KPFK 90.7FM at 3:30pm PT (6:30pm ET). You can listen live online at KPFK.org, and we'll try to post the full show later on this evening at The BRAD BLOG.

UPDATE 6:39pm PT: My KPFK interview with Herman, live from Tokyo, including the latest news on: 'Neutron beams', water 'panic', black smoke and the responses from TEPCO, the government and the people of Japan, is now posted here...

I'm now doing a weekly thirty-minute show on Wednesday's at 3:30pm PT on KPFK, Los Angeles' Pacifica Radio affiliate. (Right! Public radio! No commercials! On our public airwaves! Come and get me, O'Keefe!) My first show yesterday was, by necessity, largely coverage of the breaking Fukushima Daiichi nuclear plant crisis, but also included a brief interview with Greg Palast, the BBC journalist, my fellow muckraking pal and author of the New York Times best-sellers Armed Madhouse

and The Best Democracy Money Can Buy

Earlier this week, Palast wrote about the Obama-endorsed $4 billion plan to build two new nuclear reactors on the Gulf Coast of Texas by... wait for it ... TEPCO! That's right, the Tokyo Electric Power Co. responsible for the failing systems now at Fukushima Daiichi, as well as a number of local partners.

Palast offers insight from his pre-journalist days "as lead investigator in several government nuclear plant fraud and racketeering investigations" during the 1980's, and explains how the same "bankrupt, corrupt and criminal companies" who were busted during his work investigating the Shoreham nuclear plant in New York are still in business, and ready to get to work again on nukes in Texas and elsewhere in the U.S.