Larisa Alexandrovna draws our attention to a piece by noted reactionary Michelle Malkin. In her blog, Malkin publishes some photos of Iranian police brutalizing four men, and adds these comments:

The innocent young men in the photos were beaten, humiliated, and arrested for wearing Western clothing and hairstyles. It is in the public interest to spread these photos far and wide. The images should be seared onto the global conscience
...
Question: Will these photos be blared across the front pages of the international media with as much disgust and condemnation as the photos of Abu Ghraib or the manufactured Gitmo Koran-flushing riots?

As we'll see in a moment, Malkin hasn't quite told the truth about those photos. But even if we were to take her assertions at face value, Malkin has ignored what we may call the "Matthew 7:4 factor."...

...And this one, unlike John McCain's version, is actually amusing. Even if both of them are creepy as hell...

Kudos to the creator of the video, Adam Kontras, for his prescience and sense of dark satire back in April of 2006 when it was originally released. Even as we curse him for having given McCain, the former "straight shooter"-turned-wingnut-loon, any bad ideas.

Kontras tells us he received "lots of death threats from angry Iranians not understanding it," when he first posted it, and that he still does. As we receive far too many love letters here at The BRAD BLOG, hopefully this will to serve to send a few of the irony-impaired Iranians our way for a while instead. Always happy to serve.

(Hat-tip to Justice Through Music, who's also had this on their radar for some time!)

And as our good friend, the legendary and mysterious Freeway Blogger, mentioned when he alerted us to the above, "Remember, it's not what you say, it's how many people read it."

Newsweek's Fareed Zakaria, who has been criticized for his behind the scenes role in helping the Bush administration's PR campaign in the run-up to the Iraq war, appears to have learned from his mistakes as far as Iran is concerned. In a week where Zakaria's own employer made escalating Iranian/US tensions its cover story, Zakaria douses the Bush administration's rhetoric about the Iranian threat with a dose of reality. While Zakaria would be the first to admit that the disastrous Iraq war has strengthened Iran - along with Vladimir Putin, the Saudi royals, Egypt's Hosni Mubarak and the Syrian regime - he also recognizes that "at the end of the day, Iran is a poorly run, oil rich oligarchy, that the Mullahs are running into the ground."

( 7 so far... )
Article Categories: Iran, PBS
IAEA: US Report on Iran's Nuclear Work 'Incorrect and Misleading', 'Outrageous and Dishonest'
Guess what? It's Deja Vu All Over Again!
Big Surprise! The Intelligence is being Fixed around the Policy!
By Winter Patriot on 9/15/2006 1:28pm PT

If anyone had reason to suspect that representatives of the Bush administration would tell bald-faced lies in order to try to justify a war they had already decided to fight, we might have reason to take the following report from Reuters somewhat seriously. [my emphasis, here and below]

U.N. inspectors have protested to the U.S. government and a Congressional committee about a report on Iran's nuclear work, calling parts of it "outrageous and dishonest," according to a letter obtained by Reuters.

The letter recalled clashes between the IAEA and the Bush administration before the 2003 Iraq war over findings cited by Washington about Iraqi weapons of mass destruction that proved false, and underlined continued tensions over Iran's dossier.

Sent to the head of the House of Representatives' Select Committee on Intelligence by a senior aide to International Atomic Energy Agency chief Mohamed ElBaradei, the letter said an August 23 committee report contained serious distortions of IAEA findings on Iran's activity.

The letter said the errors suggested Iran's nuclear fuel program was much more advanced than a series of IAEA reports and Washington's own intelligence assessments have determined.

It said the report falsely described Iran to have enriched uranium at its pilot centrifuge plant to weapons-grade level in April, whereas IAEA inspectors had made clear Iran had enriched only to a low level usable for nuclear power reactor fuel.

We've been here before, haven't we? And we know what happens next, too. Don't we?

“You, sir, should be horsewhipped.”

Nothing like a little intimidation to liven up my ongoing meditation on a just society. To be threatened with e-mail violence by a Marine Corps major (ret.) steeped in righteousness — wow, how deliciously personal and unfair. What a lovely mixture of bile and adrenaline it sets to bubbling. What a temptation it creates to respond in kind.

Instead, I’ve decided to make this conversation — about violence, ignorance, idealism — public. This is bigger than both of us, sir. 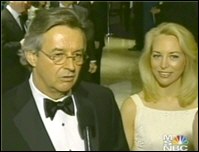 Shuster attended the White House Correspondent's Dinner. He was able to get a short interview with Joe Wilson. Republican operatives have renewed their baseless claim that Valerie Plame-Wilson's identity was not classified. For her part, Valerie Plame-Wilson stood silently by as her husband rejected the well used right-wing talking point.

More importantly, David Shuster reports that sources have told him how National Security was damaged when Valerie Plame-Wilson's identity was leaked by the White House. His intel sources say that she worked with gathering intelligence on Weapons of Mass Destruction. The outing of her name specifically damaged our national ability to collect intelligence on Iran's nuclear capabilities.

INTELLIGENCE SOURCES SAY VALERIE WILSON WAS PART OF AN OPERATION THREE YEARS AGO TRACKING THE PROLIFERATION OF NUCLEAR WEAPONS MATERIAL INTO IRAN. AND THE SOURCES ALLEGE THAT WHEN MRS. WILSON'S COVER WAS BLOWN, THE ADMINISTRATION'S ABILITY TO TRACK IRAN'S NUCLEAR AMBITIONS WAS DAMAGED AS WELL.

UPDATE FROM BRAD: It should be noted that RAW STORY's Larisa Alexandrovna broke the Plame/Iran/WMD connection several months ago. They've got the text transcript of Schuster's report now up as well.

Crooks & Liars has several other noteworthy details and thoughts...

Here are two recent news broadcasts from the Middle East. The first is from the city of Al-Basra in Southern Iraq and the other from Israel. Both clips are evidence that the threat of war with Iran has already become a reality for those who are living on its' battlefield.

Al-Basra City is located in the southern part of Iraq. The city has a seaport that is crucial for the export of Iraq's oil. Basra's location on Iran's southern border makes the city valuable strategically for the launch of a ground attack against Iran (map).

The City Council of Al-Basra has vowed that it will "do everything in their power" to prevent U.S. forces from launching an attack on Iran from Southern Iraq. The Council said that it wanted to maintain a good relationship with neighboring countries. The Council believes that Iran has a right to develop nuclear power for peaceful purposes.

The head of Basra's City Council stressed their resolve to stop any attack by saying, "I assure you when we talked about martyring that it wasn't a slip of the tongue. Iraqis are known for their willingness to offer the ultimate sacrifice for the sake of their principals."

The Israel Broadcasting Authority (IBA) recently aired this segment of a new film, "Obsession: Radical Islam's War Against the West."

Background music builds tension and suspense. Pictures of radical Islamists overlay film of soldiers marching in Nazi Germany. Hitler's followers cheer as he promises death to all Jews. Thousands of Iranians chant "Death to America". Writers and Historians speak with authoritative voices of dire warnings and predictions that this terrible history is repeating itself.

The film evokes feelings of helplessness along with the psychological terror of an impending nuclear Holocaust. It's emotional manipulation worthy of the most vile Bush/Cheney campaign advertisement. 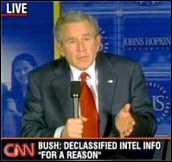