Our most recent open thread is getting too long for those who must wait for the page to load.

So it's time for a new one.

Peg C. is right; the most recent open thread is in danger of getting buried. So let's have a new one!

Introduction {by Winter Patriot}: The BRAD BLOG is pleased to introduce Steve Huff, of HuffCrimeBlog.com. Steve is not only a blogger; he's also a part of the investigative team for Court TV's Crime Library, crimelibrary.com.

The Big Cat is still on his "vacation" (as you can tell from his appearance yesterday on "Catherine Crier Live") and the kitten who has been trying to fill his "shoes" (do cats wear shoes? mine doesn't!) is too busy to blog very much at the moment. Maybe later, as they say, but not right now.

That shouldn't deter YOU! If you have something to say, please say it here!

( 179 so far... )
Article Categories: Open Thread
Open Warfare In The Middle East: The Lunatics Have Taken Over The Asylum
Bush Supports Israel. American Media Coverage Sucks.
So What Else Is New?
By Winter Patriot on 7/16/2006 11:00pm PT 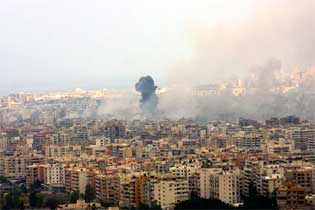 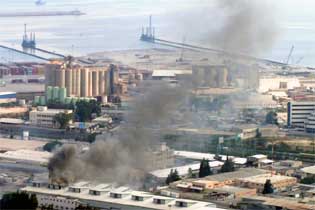 On and on it goes.

If this goes on for long enough, people might begin to ask who stands to benefit from endless war.

A very disturbing report today from The Scotsman has the Lebanese Information Minister accusing Israel of "using internationally prohibited weapons against civilians".

Is this something the Lebanese Information Minister would say even if it weren't true?

Is this something Israel would do?

How can we ever know the truth about such claims?

"We feel the entire world has left us alone to be slaughtered," said Ali al-Amin ...

To me, stuff like this transcends politics. It's either enough to knock you down and make you weep in fury, regardless of the nationality of the source, or else you need a heart transplant. IMVHO.

It's too bad we don't get much coverage like this in the USA. But oh well. No big surprise there. It's not the first time our news media have let us down, and it won't be the last.

Thank you. Now please consider this an open thread.

Elsewhere at The BRAD BLOG we've had a very interesting discussion. Its subject matter has been all over the place (as things often are here) but in essence the discussion revolves around the traditional BRAD BLOG approach to comments (where everything is considered more or less on-topic, more or less all the time) and the question of whether this approach is still suitable for a blog which has become more and more --- some would say "entirely" --- dedicated to a single issue. It's a serious question, and at this point it seems there's no easy answer.

In the (hopefully-not-too-distant) future, The BRAD BLOG hopes to evolve into a multi-page blog, where our material can be arranged in a meaningful way (election-related news on the front page and everything else someplace else, for instance, maybe, we'll see...) but at the moment we are stuck with what we have. One page. Chronological order. All kinds of stuff. What to do?

As you know by now, Brad has hit the road for his trip to DemocracyFest, and following the traditional BRAD BLOG approach to road trips, he's left the keys to the blog with his lowly and nearly frozen friend...

... who has been thinking about the question alluded to above, and scratching his head so hard it started to bleed. But then he had a really wild idea: a totally original thought that has surely never occurred to anyone else in the entire history of blogging:

It's lucky I thought of it before I bled to death! But then again I had some help.

Hat tip to Prup (aka Jim Benton), who broke a few eggs but might have started an omelette.

As readers have likely noticed, the Busby/Bilbray issue has sucked me into its vortex (or vice versa?) for the moment. Necessarily. I'll hope BRAD BLOG readers with interests in other non-Busby/Bilbray items will understand, forgive and realize that it's just me here for the most part at this time, though David Edwards and John Gideon are able to jump in with other items as their time allows.

Further, I believe the Busby/Bilbray issue merits the attention currently being given to it, both on the blog and behind the scenes, since it has ramifications for every election in this country come November (after which it will be too late to do anything about what needs to be done now concerning the security of unsecure electronic voting machines).

With that then, two small points for now about which I'll have more details in the days ahead..."Emergency Townhall Meetings" are now being organized to deal with these issues both in Los Angeles and San Diego. In LA, there will be such an event with myself, and several other speakers (details soon) on Tuesday the 27th at 8pm @ the Venice United Methodist Church. In SD on Wednesday the 28th, there will be another event, specific time/location to come shortly. A press conference may be held in conjuction in San Diego next week as well. As mentioned, details forthcoming on all of the above. If you're anywhere in the area, I hope you will turn out. It matters.

Also, yes, as some have asked, I can confirm the item now posted at RAW STORY wherein Bobby Kennedy is quoted as saying in an interview: "I would say that very soon we'll be announcing lawsuits against some of the individuals and companies involved."

Such litigation is, in fact, in the works and has been for some time. Beyond that, it would be imprudent of me to give any further details at this time for a number of reasons. But you've now got still more to look forward to.

Beyond that, feel free to use this as an Open Thread to discuss any or all of the above...or anything else about which I haven't had time to do any reporting over this past week....

Surely, you've all heard the many and various rumors and speculation of late about a Karl Rove indictment being handed down from the Grandy Jury in the Valerie Plame TreasonGate case. Either that, or you've read Jason Leopold's article from Friday reporting that Rove has informed the White House he's about to be indicted. Or the follow-up story yesterday, in which he reports that it's a done deal, Rove's attorneys have been served with the indictment and that Special Prosecutor Fitzgerald has spent Friday and Saturday with Rove's attorneys in pursuit of some sort of plea deal.

While we can't independently confirm or deny any of Jason's specific reporting, we have received various bits and pieces of note from sources that we have more than a fair bit of confidence in, while at the same time noting a few other interesting signs and tea leaves worth pondering...at least for Cazaragorn's sake...