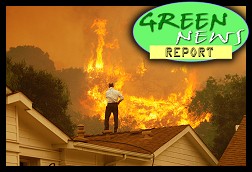 IN TODAY'S RADIO REPORT: Amid early wildfires, CA Governor Brown warns climate change is getting expensive and deadly; Record fine in natural gas pipeline explosion; JPMorgan accused of Enron-style energy market manipulation; It's official: 2012 the 9th hottest year on record; PLUS: Rightwingers buy money-saving lightbulbs - unless it helps the environment... All that and plenty of Fox 'News' bashing in today's Green News Report!

Very useful: it’s a list of 154 denialist claims with short rebuttals to each. Bookmark it, everyone!
http://www.skepticalscience.com/oneliners.php

Thanks, Doug! Skeptical Science also has a smartphone app so you can be armed with the facts and combat disinformation wherever you are!