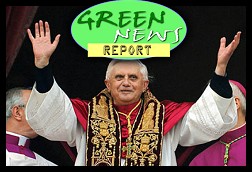 IN TODAY'S RADIO REPORT: 'Too pooped to pope': Pope Benedict's green legacy; Did global warming find Nemo?; State of the Union - Obama's next act on climate change; Wind power now cheaper than coal in some countries; PLUS: Fox 'News' surrenders to Germany (in the clean energy race) ... All that and more in today's Green News Report!

« PREVIOUS STORY "Energy Subsidies and the 'Free Market' Lie"
» Go to The BRAD BLOG front page «
"Obama Calls For Another Presidential Voting Commission - But Will It Mirror the Sham Baker/Carter Election Commission After 2004?" NEXT STORY »

Deniers are trying to reach a new low with their ridicule.

A CNN anchor asked if global warming caused the near miss by an asteroid that will take place tomorrow is caused by global warming.

Your link "Thawing of permafrost to be 'major factor' in global warming, warns UN report (UN News Centre)" dated November 2012 has been updated.

An article in LiveScience indicates that permafrost melt is much more active now than previously thought.