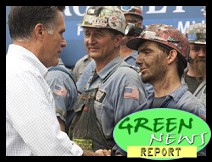 IN TODAY'S RADIO REPORT: One day later, Japan reverses planned nuclear phase-out; Romney and Republicans fight for Big Coal - with unpaid labor; New record HOT ocean temps cause lobster glut in Northeast; PLUS: Putting their bodies on the line to stop the dirty Keystone XL pipeline ... All that and more in today's Green News Report!

The U.S. media has been fingered as a root cause of denialism in the U.S.