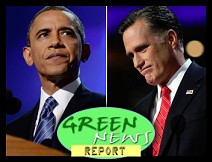 IN TODAY'S RADIO REPORT: A Tale of Two Conventions: wrapping up the DNC vs. RNC; It's official: 2012 shaping up to be hottest year on record; Shell begins Arctic drilling, but the Arctic has other plans; PLUS: 9/11, and the consequences of ignoring warnings ... All that and more in today's Green News Report!