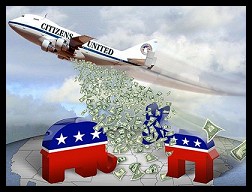 Chalk up another blow to transparency and an informed electorate, and another judicial victory for the democratic perversion known as corporate "free speech."

Last week, in Minnesota Citizens for Life, Inc. v Swanson, six of the eleven jurists serving on the U.S. Eighth Circuit Court of Appeal struck down the provisions of a Minnesota statute requiring corporations which create separate political funds in excess of $100 to file periodic financial disclosure reports with the state.

The case had been filed by three corporations, all of which contended that the reporting requirements were so onerous as to amount to a de facto ban on corporate free speech that violated Citizens United vs. Federal Election Commission [PDF]. That argument had been rejected first by a U.S. District Court Judge and then by way of a 2-1 Eighth Circuit panel decision. The majority on that panel had noted that even Citizens United recognized the government's right to "regulate corporate political speech through disclaimer and disclosure requirements" so long as the government did "not suppress that speech altogether."

On rehearing before the full 8th Circuit, Chief Judge William C. Reilly, a George W. Bush appointee, writing for the six member majority, acknowledged that the Minnesota statute "does not prohibit corporate speech." The majority ruled, however, that that state statute entailed excessive regulation which included an "ongoing" reporting requirement on the part of the corporate political fund that continues unless or until the corporation dissolves the fund. Chief Judge Reilly described that burden as both "onerous" and "monstrous."

In a blistering dissent, Bush-appointed Circuit Judge Michael J. Melloy, accused the majority of giving "short shrift" to a second, fundamental principle enunciated by the Court in Citizens United --- the voting public's "right to know where the money is coming from."

Melloy, quoting from Citizens United, stressed that this principle applies not only to voters but to corporate shareholders:

Shareholders of corporations that engaged in campaign-related speech possess a particular information interest….both politically and from a business perspective, in knowing about a corporation’s campaign speech. Disclosure allows shareholders to "determine whether their corporation’s political speech advances the corporation’s interest in making profits, and citizens can see whether elected officials are in the pocket of money interests."

Melloy described the majority's application of strict scrutiny "to a law that does not directly limit speech simply because the burdens the law imposes are heavy enough to be an indirect limit" as "circular and conclusory." He essentially accused the majority of judicial activism in failing to either recognize the state's legitimate interests in disclosure or to defer to the Minnesota legislature's right to determine reasonable reporting requirements.

According to Judge Melloy, the reporting requirements which Judge Reilly described as "onerous" and "monstrous" entailed the filing of "a single-page form and checking one box once in non-election years and five times in an election year."

The case could possibly wind up in the U.S. Supreme Court. But if it did, the result may be the same considering that the majority recently signaled, in shutting down a 100 year-old Montana anti-corruption statute, that they value corporate "free speech" in the form of an unlimited ability to fund commercial propaganda over a public right to know that is essential to democratic governance.

« PREVIOUS STORY "Someone Else 'Gets It', When It Comes to the Need for Transparent, Hand-Counted Elections"
» Go to The BRAD BLOG front page «
"Dana Siegelman: I Met Karl Rove at the DNC" NEXT STORY »

The Republican long-term strategy of appointing partisan political hacks to the judiciary at every level is working out very well for them.

Does this mean the Commerce Clause is dead? Can drug dealers now sell their "product" without fear of federal sanction? Can corporations now hide their pollution and poisonous additives behind the guise of the 5th Amendment?

Maybe this is hyperbole, but then again...

As I recall, this bill passed unanimously, as in all the Democrats and all the Republicans supported it. Now 6 people I never heard of are overruling this? Well, democracy will still exist in the history books, unless those are rewritten without us knowing...

« PREVIOUS STORY "Someone Else 'Gets It', When It Comes to the Need for Transparent, Hand-Counted Elections"
» Go to The BRAD BLOG front page «
"Dana Siegelman: I Met Karl Rove at the DNC" NEXT STORY »
See MSVL and support BRAD BLOG! Click here for signed premium version!