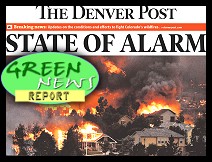 IN TODAY'S RADIO REPORT: Record heat, record wildfires & Michelle Malkin on the run; Record flooding in FL so GOP fiddles with federal flood insurance; Climate deniers smack-down by appellate court is good news for anyone who breathes; PLUS: 80% renewable energy by 2050? New study says 'Yup! And it's easy!' ... All that and more in today's Green News Report!

Two massive Shell Oil Co. drilling rigs left a Seattle dock early Wednesday, starting the long trek to Alaska's Arctic waters and leaving behind years of legal battles and regulatory hurdles in a quest for riches under the sea.

Thanx kids! Have a good wknd.

Another cost in calculating EROI of dirty oil power generation is the vast waste and ruination of water needed to support life.