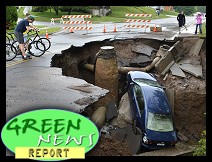 The NREL (National Renewable Energy Lab) just finished a study sponsored by the Department of Energy which says:

(A Methanol Economy Way, under "UPDATE"). If we go beyond the "tipping point" it is not because there are no other ways.

We can do this!

Thanks, Dredd! Yes, I saw that and meant to include it on today's Green News Extra...

So thanks for doing it for me!

Another good decision concerning regulation of greenhouse gases. The Federal Court of Appeals For The District of Columbia has upheld the EPA regulations on carbon dioxide emissions (COALITION FOR RESPONSIBLE REGULATION, INC. v. EPA).