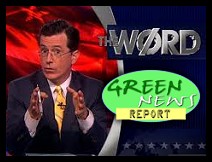 IN 'GREEN NEWS EXTRA' (see links below): Top 5 US cities most vulnerable to hurricanes; House GOP's 7 bills increasing drilling, rolling back public health standards; Cost of deaths from coal pollution higher than value of electricity produced; Big US firms to develop plant-based plastics; Secrets of the first artificial leaf; Geo-engineering may disrupt rainfall; Solar Plane completes intercontinental voyage; Why are US taxpayers subsidizing the coal industry? ... PLUS: Warning: you are approaching a state shift in Earth's biosphere ... and much, MUCH more! ...

« PREVIOUS STORY "VIDEO: Brad on RT on Questions About Wisconsin's Recall Election Results"
» Go to The BRAD BLOG front page «
"Did Our Public Airwaves 'Win' it for Walker?" NEXT STORY »

That "Approaching a state shift in Earth's biosphere (Nature)" is a real "heads up" warning.

I like the story about plastics being made from plant materials that will degrade naturally in landfills when we're done with them. That's a technology winner! People don't have to change their behavior (I presume) and we solve the problem anyway.

I also like the story about the artificial leaf. I wonder how much energy can be produced. If it's enough we could use them to power all our home needs and to charge our electric cars, so we might save something like 99% of all our current fossil-fuel energy needs. How long 'til it's available in some early commercial form?

Technology can't solve all our problems, but if we have the sense to invest in research instead of sticking our head in a bucket of oil, then we have a chance.

Thanks, Dredd and MarkH, for your comments!

MarkH, previous experiments have shown imitating photosynthesis can generate electricity, but so far each has produced only a trickle charge. Proof of concept, but commercialization is usually estimated to be a perpetual 5-10+ years away --- and entirely dependent upon research funding.

The breakthrough in the story above is the discovery of cheap, abundant materials that can produce the charge, rather than precious metals like platinum required in previous experiments. The next step will be increasing the electricity produced to more than a trickle; widespread adoption of this as an energy source may also depend on greater energy efficiency, so that devices don't need as much electricity.