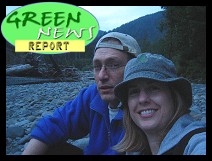 The Green News Report was scheduled to stand down for a few episodes beginning during Memorial Day Week next week, but my cold (the one you may have noticed in Tuesday's report) has gotten a bit worse. Actually, I feel fine, but my voice has another idea entirely.

So we're going to duck out a bit earlier than planned, since we're on the road this week anyway and it makes life, and healing, a bit easier before the holiday.

Brad and I will return with the Green News Report on its usual twice-weekly schedule beginning Thursday, June 7th! "See ya" then!

(P.S. I'll probably be Tweeting throughout the duration nonetheless, so please follow @GreenNewsReport, if you are not already doing so!)

Get well soon. And happy trails.

Meanwhile, I just discovered a global warming induced climate change factor we tend to forget about.

A post at Ellsberg's indicates that the 450 hair-trigger Minute Man missiles, if fired, would cause instant global climate change that would erase the human species totally.

Have a good memorial day kids!!! Thanx for the outstanding GREEN REPORTS and take care.

Thanks, guys! Your kind thoughts are much appreciated!

Hugs Desi! Get well soon! I hope you both have a great holiday. You have earned it. I look forward to your informative reports every week. The the news we get NOWHERE else! Thanks so much!

You gotta check this one out folks.

The N. Carolina legislature is working on a law to make it illegal to say the sea level there will rise more than 8 inches in official discourse.

One wonders what they will say when they find out neighbor Virginia has already had a 1.5 foot sea level rise.