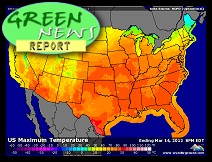 IN TODAY'S RADIO REPORT: War with China? Trade war, that is; March heatwave kills spring, brings early summer for US; Keystone XL pipeline more bad than good for the economy and the environment; PLUS: TV weatherman singlehandedly overturns the laws of physics ... All that and more in today's Green News Report!

IN 'GREEN NEWS EXTRA' (see links below): Planet-saving, Nobel-winning ozone scientist passes; US, UK set to agree to emergency oil stocks release; Gulf Coast to get 80% of BP fines; Refiners Push EPA to scrap gas rule wanted by automakers; US solar grows to new record; 'Dark days' for coal; GOP 'playing politics' with wind credits; Water pollution from farming worsening ... PLUS: Will your city see record flooding in 2020? There's a map for that ... and much, MUCH more! ...