The following are quotes from media critic Howard Kurtz of CNN and The Daily Beast, as published for all to see last Sunday, even as Irene continued to devastate vast swaths of the Northeast, in his obnoxious article "Hurricane of Hype."

We, um, responded to his article here, while the New York Times' Nate Silver took a more statistically empirical approach in response, in "How Irene Lived Up to the Hype"...

Kurtz has yet to retract, correct, or apologize, despite Irene having resulted in "the deaths of at least 45 people in 13 states." according to Associated Press, making it the 3rd deadliest U.S. storm in over 30 years.

While Kurtz has been appropriately slammed for his idiotic "Hurricane of Hype", we should not overlook the salient point made by Bill McKibben, when interviewed by Brad on last Tuesday’s Malloy Show --- specifically, the failure of the MSM to discuss global climate change in relation to Hurricane Irene.

Their behavior can be traced to their mother of all propaganda, a forget-to-think-tank.

Haven't and don't read Kurtz's columns. Just cause people choose to build their houses in known paths of hurricanes and so close to the shore they're actually in the water doesn't make it Armageddon and climate change doom time.

Just cause people choose to build their houses in known paths of hurricanes and so close to the shore they're actually in the water doesn't make it Armageddon and climate change doom time. 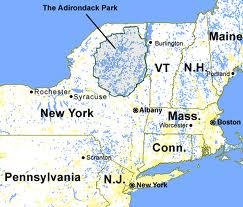 It appears, anonymous, that you are a climate science denier in dire need of a geography lesson.

Check out the locations Brad covered in Howard Kurtz's Hurricane of Haplessness and compare them to this map.

As you can see, neither the Adirondacks nor Vermont are "in the known paths of hurricanes" or "so close to the shore they're actually in the water."