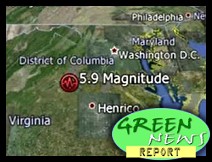 IN TODAY'S RADIO REPORT: BREAKING: East Coast Earthquake!; Inhofe's 'Hoax' - Hot and Hotter: more record-breaking heat around the world in a record-breaking year; Civil disobedience at the White House over dirty oil pipeline; PLUS: GOP cat fight erupts as Republican candidates spar over science ... All that and more in today's Green News Report!


With people power and time-tested tactics of civil disobedience - join thousands of people from across the continent in a wave of sustained sit-ins. Together we'll amplify our voices and escalate the movement and stop the Keystone XL pipeline to the Canadian tar sands

Huntsman's recognition of what is a well-established consensus amongst climate scientists places him miles ahead of Ron Paul, whose policy statements are at odds with established facts.

There is clear evidence that the temperatures in some parts of the globe are rising, but temperatures are cooling in other parts. The average surface temperature had risen for several decades, but it fell back substantially in the past few years.

Odd thing to say during the hottest year of global temperatures on record.

While Paul favors an end to oil subsidies and going to war to protect perceived oil interests, he opposes government investment in alternative energy, believing that market incentives will solve the alternative energy problem

I felt the Earth Quake here but didn't realize that is what is was until I saw the news.
I thought jeeze another weird addition to my hot flash

Stealing from a commenter at C&L...
Are you an earth quake "elitist", Ernest

Anyone hear Malloy today on the earthquake in DC? 10-11 miles from 2 northern VA nuclear reactors, which apparently are ranked 7th most vulnerable in the US to earthquake damage.

Hey Brad and Desi --Your Green News was really packed this time. I really do appreciate all the research you do for these reports. They are so informative! Keep up the good work!

Thanks, 4earth, very much appreciated! (and we had to cut a lot to get it under six minutes for our radio affiliates)