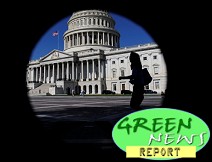 IN TODAY'S RADIO REPORT: Debt ceiling theatre is over --- for now --- with clean energy & environment the biggest losers; It's official: Record heat wave makes for a record July; Don doesn't do Dallas (Tropical Storm Don, that is); PLUS: The most anti-environment Congress ever... All that and more in today's Green News Report!


The National Drought Mitigation Center (NDMC) announced yesterday that the proportion of the Lower-48 states experiencing "exceptional" drought conditions - the most severe of five categories on the U.S. Drought Monitor - during July was the largest ever measured since such monitoring began 12 years ago.