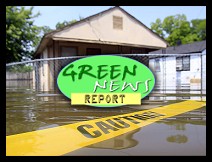 IN TODAY'S RADIO REPORT: The Mighty Mississippi crests in Memphis (but Graceland is spared!); Record drought dries out Texas (the Governor's prayers are not answered); What The Frack? - Flammable drinking water near natural gas wells; Japan scraps nuclear plans; Florida nixes high speed rail, other states rejoice; PLUS: Guess who leads the world in clean energy? (hint: it ain't us) ... All that and more in today's Green News Report!

For the entire state, data released Monday by the National Climatic Data Center will show that last October through April was the driest such period on record. On average, Texas received less than 6 inches of rainfall.

Oil prices fall after U.S. crude build: Commodities and equities fell broadly after weak economic data in the world's top economy, with a sharp slowdown in the vast services sector and less hiring by private companies in April. (Reuters)