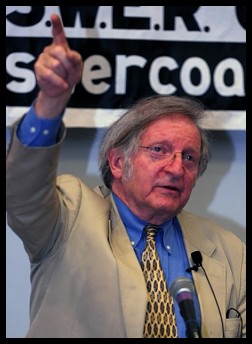 "The fact that the U.S. government could...seek to put away people because of their political dissent was a real major eye-opener to me." - Leonard Weinglass, commenting on the 1968 Chicago Seven trial.

The cause of civil liberties has lost a legal champion.

Throughout a long and distinguished legal career, during which he defended, among others, the Chicago 7, Daniel Ellsberg in the Pentagon Papers Case, Mumia Abu-Jamal, Angela Davis, Julian Assange, and the Cuban Five, Leonard Weinglass served as a vital buffer between an increasingly oppressive, corporate security state and those who would dare to challenge it.

He will be sorely missed.

This is not the time we need to lose folks like him.