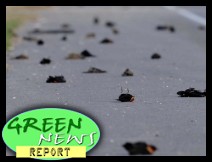 IN TODAY'S RADIO REPORT: Snow-mageddon backlash in NJ; Flood-ageddon escalates in Australia; New year, new rules for big polluters; New GOP majority plans new assault on EPA ... PLUS: Gee, that's not apocalyptic at all: 1000s of birds, 1000s of fish drop dead in Arkansas .... All that and more in today's Green News Report!

Instead, he attacked the other elected officials who stayed and tried to do the job he should have been doing. He praised the state's efforts in his absence and placed blame on some of the locals for screwing up.