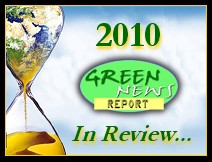 IN TODAY'S RADIO REPORT: The Green News Report's 2010 Year in Review: Around the world and back again, the top green news stories of the year --- from politics to the planet, a quick look back over where we've been ... PLUS: Make the next year the greenest ever! .... All that and more in today's Green News Report!

In much of the developing world, however, the picture was quite different. For many of the heads of state who had attended a climate change summit for the first time in Copenhagen, it was a wake-up call to the importance of the problem, which most of them had hitherto not fully appreciated. Thus, with greater public awareness of the climate change issue, together with increasing climatic events, such as the devastating floods in Pakistan, the issue has taken on an importance it did not have before Copenhagen. Many countries in the developing world have been implementing significant initiatives.