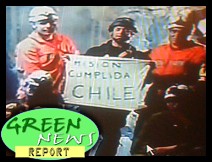 IN TODAY'S RADIO REPORT: Obama lifts the ban on offshore oil drilling, even as oil continues to wash up on beach in the Gulf; Google goes offshore too - with wind; A new solar project on public lands in Nevada; Seattle says goodbye to the big yellow phone book ... PLUS: Good news for a change: all 33 Chilean Miners are rescued ... All that and more in today's Green News Report!

"To ensure a disaster like this never happens again, we must know what caused it in the first place," said Peter Lehner, executive director of the Natural Resources Defense Council. "We're still waiting for that answer and until we get it, the moratorium should remain in place."

Gee, that's not change I believed in. I say Jesse Ventura for President. Anyone see him on George Stephanopolis (whatever his name is)?