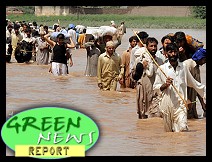 IN TODAY'S RADIO REPORT: Thousands dead in Pakistan floods; Temperature records shattered around the world; Plankton levels plummet around the world (and why it matters to you and me); Alarm bells ignored in the MI oil spill... PLUS: It’s official! The BP oil disaster in the Gulf is now the WORST accidental oil spill in the history of mankind... All that and more in today's Green News Report!