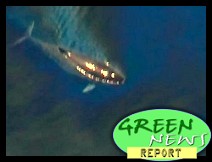 IN TODAY'S RADIO REPORT: BP Disaster now Worst Ever in the Gulf --- and worse than any of us can imagine; BP was ready for walruses, but not hurricanes; John Kerry, ready as ever to compromise... PLUS: Baby it's hot outside, around the world --- and on Capitol Hill ... All that and more in today's Green News Report!