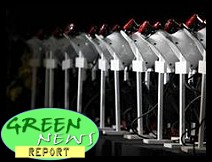 IN TODAY'S RADIO REPORT: Remembering lives lost to coal; South hit by tornadoes and oil spills ... PLUS: Lindsey Graham's bizarre Senatorial hissy fit and how it could well scuttle comprehensive climate and clean energy legislation... All that and more in today's Green News Report!

Swedish climate scientist says sun NOT Co2 is responsible for warming, that warming has stopped, and to get ready for cold weather
http://english.peopledai...90777/90853/6959757.html

Fred Goldberg, the well-known denier quoted in your article, is not actually a scientist. His background is in welding technology, according to SourceWatch.

Again, you can always pre-bunk yourself (and people like Goldberg) by checking out what the scientific data actually says about each of his bogus arguments --- ALL of them have already been examined, considered, addressed and dismissed by actual scientists in these fields.

EVERY denier argument is indexed, catalogued and fully debunked with the scientific data at Skeptical Science.com.

Also, notice how deniers who say "it's the sun" simply ignore all the other obvious field data across Earth systems sciences that go far beyond the sun. Like ocean acidification: