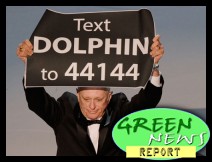 IN TODAY'S RADIO REPORT: The Arctic is venting; Food poisoning is expensive; Texas is breaking wind (records, that is); Limbaugh and cow farts ... PLUS: The 'greenest' Oscars yet ... All that and more in today's Green News Report!

Please watch The Cove. I watched it last night for the first time.

I dunno, cowboys, I think something just moved inside my brain, and I'm not sure I can justify supporting mass meat production in any form any more.

The way those dolphins were slaughtered was just beyond brutal. Very hard to stomach.

Yeah, why harness solar power when there's so much money in the ground.

This just in:
" ‘Anti-Lobbyist’ Obama Administration Recruited Left-Wing Lobbyists to Sell Bogus ‘Green Jobs’:
"After two studies refuted President Barack Obama’s assertions regarding
the success of Spain’s and Denmark’s wind energy programs ... the Department of Energy turned
to George Soros and to wind industry lobbyists to attack the studies."
http://pajamasmedia.com/...o-sell-bogus-green-jobs/

Oh. You again. I thought you had gone away.

You can, you know?

Ravenhairedmaid! You forgot to say that Al Gore is fat!!!1!!

Gotta love the "America Can't" crowd. IF the policies they support are any indication, it's not enough for them that federal & state governments subsidies & tax breaks for old, dirty fuels dwarf that for clean energy.

Fossil fuels including oil, natural gas and coal received more than twice the level of subsidies that renewable energy sources got from the U.S. government in fiscal 2002 through 2008, the Environmental Law Institute said.

Government spending and tax breaks amounted to $72.5 billion for fossil fuels and $29 billion for renewable energy, according to a report by the institute today.

Never mind that the old, dirty fuels are killing them and their children, costing them $120 billion in 'hidden' health care costs each year due to air pollution (and that's not even counting water or land pollution health costs, or cleanup costs):

The report, "Hidden costs of Energy: Unpriced Consequences of Energy Production and Use," (National Academies of Science, 2009) ties much of the hidden costs to medical care sought by people affected by air pollution from electricity generation and vehicle transportation. (WSJ, 10/20/09)

No, that's not enough! If the policies they support are any indication, they also want to make sure that as many Americans as possible stay unemployed as long as possible, and ensure the U.S. loses the clean energy race, so we can simply transfer the billions we send to oil-producing countries to China and India instead, to sell us the technology we invented, so they can make the billions instead of us....

If the policies they support are any indication, they really don't believe in paying American workers to build American-made products on American soil that will save us all tons of money in the long run and bring us a cleaner, healthier nation. ("The number of jobs in America’s emerging clean energy economy grew nearly two and a half times faster than overall jobs between 1998 and 2007," Pew Finds Clean Energy Economy Generates Significant Job Growth, 6/10/09.)

That's quite an ingenious plan for the long-term global competitiveness of the U.S. ya got there!