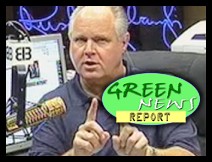 IN TODAY'S AUDIO REPORT: Aspens dying in the West; Republicans dying on the energy vine; Solar power not dying in DC and California ... PLUS: Rush Limbaugh calls for the death of a NY Times columnist ... All that and more in today's Green News Report!

IN 'GREEN NEWS EXTRA': Old Energy Interests Try Hand at 'New Media' to Defeat Climate Bill; Shell wins federal approval to drill for oil off Alaska coast; Nudging Recycling From Less Waste to None; Obama Plants Monsanto And CropLife Officials In Key Agriculture Posts; Why the Copenhagen Climate Talks Will Be a Bust; Hunters and Anglers Rally for Climate Bill ... PLUS: Super Freaking Wrong: "Superfreakonomics" gets its badly wrong on climate science ....

A Censored Headline and why it Matters: German High Court Outlaws Electronic Voting

(The Intelligence Daily) --- The justices above are clearly the most rational group of high level functionaries in the industrialized world. They did what no other court would do in Europe or the United States. They effectively outlawed electronic voting. On March 3, 2009, the German Federal Constitutional Court declared that the electronic voting machines used in the 2005 Bundestag elections for the German national parliament were outside of the bounds of the German Constitution.
~snip~

Germans figure this crap out. God damn I am jealous. So when the fuck are we going to figure out the "chain of custody is broken" with the use
of "electronic vote tabulation devices?"