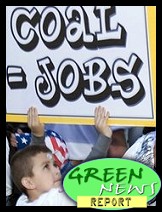 IN TODAY'S AUDIO REPORT: Bush Administration smacked down (again); Critics of mountaintop removal coal mining shouted down; GOP complaints shut down a hearing on forged letters ... PLUS: One airline's novel idea for "lightening the load" to save fuel ... All that and more in today's Green News Report!

IN 'GREEN NEWS EXTRA': How CBO budget scoring devalues efficiency ... WITH PUPPIES!; What the hell is a 'Smart Grid' and why should you care?; Surprisingly, banks are a roadblock to walkable development; Scientist says Arctic Ocean to be ice-free in summer; Aspen trees die across the West; Gut Check: Warmer planet, fewer crops?; Austin sees huge potential for solar power, thanks to satellites ... PLUS: Project Censored 2010: U.S. consumers exposed to toxic chemicals banned in Europe ....

hOW CAN i GET A COPY OF kEITH oLBERMANN'S REPORT
10-16-09 OF THE CONDITION OF OUR COUNTRIES CURRENT
hEALTH cARE SYSTEM. pLEAS aDVISE...
pSIMONS@NEW.RR.COM