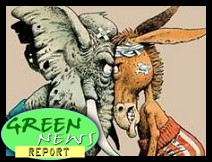 IN TODAY'S AUDIO REPORT: Another step forward in the House for climate and energy legislation --- but is it enough? PLUS: YOU are brilliant, and The Earth is hiring! .... All that and more in today's Green News Report!

Got comments, tips, love letters, hate mail, legislative sausages? Drop us a line at GreenNews@BradBlog.com or right here at the comments link below. All GNRs are always archived at GreenNews.BradBlog.com.

IN 'GREEN NEWS EXTRA' (links below): "Sun For Rent": Massachusetts initiates creative financing to make solar cheap & easy; Recycling used parachutes; Another beef recall due to E.coli in the Midwest; House Democrats hire Speed Reader --- see him in action; PLUS: How to "Green" Your Workplace, a Net Impact Special Report ...See below for more!