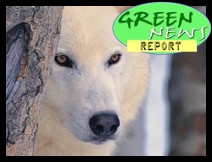 Welcome aboard to our latest network affiliate - Roots Up Radio.com, where the Green News Report is heard on Action Point with Cynthia Black!

IN TODAY'S AUDIO REPORT: Mmmmmm...mercury in tuna --- Sorry, Charlie!; Idaho gunning for wolves, but Wyoming gets shut out; PLUS: Size matters --- the world's largest, and smallest, in solar power .... All that and more in today's Green News Report!

Got comments, tips, love letters, hate mail, delicious fishes? Drop us a line at GreenNews@BradBlog.com or right here at the comments link below. All GNRs are always archived at GreenNews.BradBlog.com.

IN 'GREEN NEWS EXTRA' (links below): Is China really going green?; Corroded pipes discovered at New York nuclear power plant; The UK gets an all-electric family car, so why not the U.S.?; Philly is Goin' Green by 2015, and how they'll do it; PLUS: "Water is the oil of the 21st century" --- are we headed for Resource Wars? ...See below for more!

This is a very thought provking article that I came across today. Here is a link if you'd like to take a look as well:

Do these f***** in our own govt care if people's food source gets fucked?

I know. I've been screaming about it on my blog for ten days. Not only that, but they purposefully are not even testing to confirm all suspected cases. I could probably start ranting for a few gigabytes right now, except I'm strangely out of it just now. Probably all my running around after the multifarious bald assaults to my sensibilities with the the "handling" of this manmade swine flu pandemic.

Lately, it seems to happen whenever I pay acute attention to just about anything.

The end is so nigh.

Totally OT...what's new, but DN had a great piece on the covergence of the military with overboard christians:

It's funny, I was just telling my psychologist sister this weekend about the fanatical enddays christian fundamentalists joining up with the fanatical zionists and pooling their funds. It got me to wondering whats the difference between Nostradomus's predictions and the Bibles apocalypse...Nostridomus just wrote down his visions, but the churches interpret the apocolypse. Hmmmm.

I wonder next... when will people get it, and trust love not fear and start using their minds well?