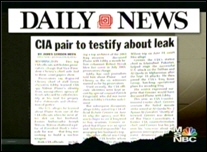 Yesterday, The New York Daily News reported that two top CIA officials discussed Valerie plame with Cheney's former Chief of Staff, Lewis "Scooter" Libby. If true, the CIA officials' testimony will show that Libby knew of Valerie Plame's status at the CIA at least a month prior to Robert Novak's column which first publicly exposed Valerie Plame's undercover status. The testimony of the two top CIA officials is expected to bolster the charge of perjury against Libby. Libby has previously testified that he first learned about Plame from a reporter.

MSNBC's Keith Olbermann takes notice that this story had been originally reported 2 months earlier by Jason Leopold, an internet journalist writing for Truthout. On May 13th, Leopold reported that Karl Rove, like Libby, had been served with an indictment for perjury and obstruction of justice. This report has not been confirmed by other media sources, triggering a fierce debate on the internet about the accuracy Leopold's report that Rove has been served with an indictment. Truthout editor, Marc Ash, is defending the accuracy of the report.

If Leopold ends up being correct, then preznit blush ends up keeping indicted leakers on his staff after saying he would fire them even before they were indicted.

If Leopold is wrong, then the republican dictatorship is making overt attempts to discredit certain news sources.

A runaway government. A government within a government, far worse than Nixon.

Gandhi was once asked what he thought about western civilization.

His response was: "I think it would be a good idea."

If it turns out Leopold made the whole thing up, it's the end of his career. I think we can rule out any reporter's being that stupid.

So what about the story? My guess is that Karl Rove enlisted several people, one to serve as Leopold's "primary source" and others to "confirm" what Source #1 said. The primary source would have given the other names in support. All of them would have been familiar to Leopold and trusted by him. Their stories confirmed one another, so Leopold went ahead. And nothing happened.

Now Leopold looks like an ass at best, a liar at worst. Either way, he becomes a talking point for right-wingers who may point to him and say, "We told you the liberal media are out to get us!" And if Rove is ultimately indicted, Fox Network will have something else to focus on as a counterpoint.

I read somewhere that Rove's indictment was delayed because Fitzgerald is being challenged by someone above him.
The case was decribed as "sealed vs. sealed".
So we don't actually know what the deal is. But it sounded like someone is trying to block the indictment.

Anyone heard about this?

Looks like Cheney who was running war games on 9/11 is gonna be attached to a Vespa "Scooter" at full throttle when it runs into the side wall of the Pentagon. Even if all videos are confiscated, we can still hope for a still photo where Cheney's head smashes into the most protected building in Amerika on watch 24/7. Nice handwritting DICK.

Sealed indictment leads to Rove "rolling over" on Cheney, but in a way that makes sure that there is no blowback to the Republicans before the mid-terms.

Rove is not a confirmed neo-con, nor a theo-con nutjob, just a ruthless and despicable Republican thug willing to do ANYTHING to get his Republicans elected. There is no love lost between the Ruthless Republicans and the neo-cons in the VP wing of the White House.

The one, single, absolute goal they share in common is that the Republican Majority in the house and senate MUST be protected at all costs. Anything less could be crippling to their cause and even potentially land them in the big house.

It's a simple pattern of criminal conspiracy that they have been playing out for 20 years --- OF COURSE they are getting good at it.

So, what happens to Robert Novak with all this? He's the moron who released the info to the public. He bares "No responsibility" in all this? I realize, it's Libbey and the White House staff that are to blame, but I certainly hope this right wing piece of trash bares some responsibility to exposing a CIA agent. I've detested this jackass long before this came to light. Hearing he was the giddey piece of trash that released the info is no surprise to me.

I mean, the Dixie Chicks are being black balled for expressing their distaste for this corrupt regime, and Novak walks away an innocent victim? Sure as hell hope not!

On Mike Malloy's show I think he was making the case that the indictment was sealed by Gonzalos, putting Fitzgerald in a position where he has to break a law to go public.

That would certainly clear Leopold!

Leopold says Tony Snow won't comment on ANY question about Rove! Interesting the case is called sealed vs sealed by somebody. Maybe that's a clue, put out there by some "wiseguy" who's really a patriot and wants the public to know.

Karl, when you go down, the whole world is going to rejoice and you're never going to have that self assured grin on your face again.

Maybe Bush has already pardoned Rove, but then used an Executive Order to slap a national security secrecy order on the pardon.

I put nothing past these characters.