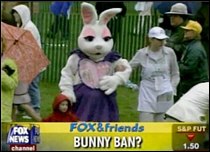 We haven't forgotten Fox News' phony 'War on Christmas' where Bill O'Reilly, John Gibson and other Fox personalities attacked anyone or anything that used blasphemous words like "holiday".

Fox is again "fighting for the rights the Christian Majority" with another faux menace: The War on Easter.

Undoubtedly, the "Spring Bunny" will cause the downfall of The Republic.

Then.. what we do is, take some ARBITRARY DATES that space out our "off time" and make those "national holidays". We really only have 2 that are valid, that I can think of off the top of my head.

July 4th, and Thanks Giving. Not sure what other holidays pertain to "this country" and not something else.. OH.. President's day.. labor day, memorial day.. veteran's day.. any others?

How about National Bradblog Day?

What a bunch of ruckus over nothing. Just to distract us from what is really going on I guess.

MLK Day. He DID save our country, ya know.

And THEY call US tin foil hatters????

I just knew they were going to pull that shit on the "America Haters" aka Fox viewers
Hannity
Limpball, et al, the kings of Psy-ops

OK, so they're fabricating another war on a Christian holiday. Let's just imagine that this were a real "war"....

"you know what bunnies and eggs really symbolize? NOT the resurrection, but fertility...because they were a pagan symbol."

Umm...If this is the case, then why the hell are they so offended by it not being called an "Easter Bunny"..."Spring Bunny" would in fact be more accurate, now, wouldn't it?

You know, I would still believe in the Easter Bunny
But I could never figure out how it laid chicken eggs
The Cadbury commercial finally did my belief in

Hows that Ricky, was that a good argument

What does a giant bunny have to do with Jesus rising from the dead? (by the way)

The war on Easter began when they stopped giving us workers a day off for Easter. But these people didn't say anything about that, because corporate America benefitted from that...where were they when they pulled Easter as a paid day off? Wasn't that a war on Easter?

I don't give a crap about Easter, by the way, I just want the paid day off!

I WANT THESE LUNATICS TO GET US BACK OUR PAID DAY OFF FOR EASTER!!!

OH! And don't forget to run out and buy all your Easter sales at the dept stores!!!

I got my Bonnet! LOL

Is that the Easter bunny on Trix cereal? Ricky, is it?

Easter is and has always been on the first Sunday after the first full moon after the vernal equinox. Remember, the "Last Supper" was the Paschal Feast or Feast of the Passover. So the date (which varies wildly from year to year) will never be fixable. The pagan symbolism was introduced to tie Christianity in with ancient rites of spring. And the "Easter Bunny" isn't even a Christian saint.

But *sob* it's so sad how old homely traditions are getting torn down now. isn't it?

The Day that fox lies & propaganda goes down the toilet . . . THAT will be a Holiday!

I heard that the Faux crew was broken hearted when they found out that the ever ready bunny is not really the easter bunny ...

I've spoken to Bugs Bunny, and he's quite offended by all this.

Elmer Fudd tried to take care of this problem several weeks ago, but he shot his partner in the face instead!

I heard Dick Cheney shot the Easter Bunny in the face...he thought it was a quail! The Easter Bunny, then, later apologized to Cheney for the mistake...

How to spot a baby conservative
KID POLITICS Whiny children, claims a new study, tend to grow up rigid and traditional. Future liberals, on the other hand ...
Mar. 19, 2006. 10:45 AM
KURT KLEINER
SPECIAL TO THE STAR

Remember the whiny, insecure kid in nursery school, the one who always thought everyone was out to get him, and was always running to the teacher with complaints? Chances are he grew up to be a conservative.
At least, he did if he was one of 95 kids from the Berkeley area that social scientists have been tracking for the last 20 years. The confident, resilient, self-reliant kids mostly grew up to be liberals.
The study from the Journal of Research Into Personality isn't going to make the UC Berkeley professor who published it any friends on the right. Similar conclusions a few years ago from another academic saw him excoriated on right-wing blogs, and even led to a Congressional investigation into his research funding.
But the new results are worth a look. In the 1960s Jack Block and his wife and fellow professor Jeanne Block (now deceased) began tracking more than 100 nursery school kids as part of a general study of personality. The kids' personalities were rated at the time by teachers and assistants who had known them for months. There's no reason to think political bias skewed the ratings — the investigators were not looking at political orientation back then. Even if they had been, it's unlikely that 3- and 4-year-olds would have had much idea about their political leanings.
A few decades later, Block followed up with more surveys, looking again at personality, and this time at politics, too. The whiny kids tended to grow up conservative, and turned into rigid young adults who hewed closely to traditional gender roles and were uncomfortable with ambiguity.
The confident kids turned out liberal and were still hanging loose, turning into bright, non-conforming adults with wide interests. The girls were still outgoing, but the young men tended to turn a little introspective.
Block admits in his paper that liberal Berkeley is not representative of the whole country. But within his sample, he says, the results hold. He reasons that insecure kids look for the reassurance provided by tradition and authority, and find it in conservative politics. The more confident kids are eager to explore alternatives to the way things are, and find liberal politics more congenial.
In a society that values self-confidence and out-goingness, it's a mostly flattering picture for liberals. It also runs contrary to the American stereotype of wimpy liberals and strong conservatives.

#19 In general the nasty and "pain in the ass" type lil bastards grow up to be conservatives...Is that any Surprize?

If anyone comes back this far to look at the posts
#19, about kids being conservative
It also appears they're molding our "Little Manchurian Candidates" from a very early age (good story)

Screw them. They ought to know what a real War on Easter would look like, so we're giving it to them. Let's see if they mention us. Are they full of shit, or when presented with the real war, will they bring it up? We're giving them a War on Christmas this year too.

This war is really heating up. The Whithe House has even moved it's annual Easter Egg Roll to the Monday following Easter! And what about the War on Passover? Try finding Matzo at your local Piggly Wiggly in Texas.

This war is really heating up. The Whithe House has even moved it's annual Easter Egg Roll to the Monday following Easter! And what about the War on Passover? Try finding Matzo at your local Piggly Wiggly in Texas.

These fucktards just get dumber, crazier and more shrill by the week. Are they that desperate for some kind of issue to distract from the Rethuglican's implosion?

I say we have some fun with this wingnuts: Around early to mid june, we start rumblings about a War on Independence day, and watch the Freepers and hillbillies freak out.

These kinds of idiots almost make me favor forced sterilizations.

Oh, I think Bill watches the Colbert Report because about a ... Golly, a month or so... before Bill and Faux news aired this idea, Colbert started his "Easter Under Attack" series and discussed the role of the Easter Bunny in the media.

Thanks, Faux News. I'm glad you're watching the living parody of your number one star.

War on Easter? Just one question for you math majors out there; If Christ was to be in the grave for three days and three nights which is 72 hours, how could Jesus rise on Sunday if he died on Friday? Wouldn't that make it Monday? I guess secular religion might be giving everyone the wrong info. I don't question the death and resurection of Christ, but what does Easter bunnies and eggs have to do with that event? Perhaps better research into that subject would allow us to understand the tradition better, thats if we could get past emotional feelings and lying to our kids. Tom