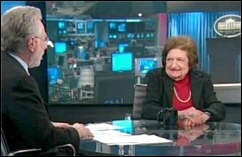 For the first time in three years, the President allowed Helen Thomas to ask question during today's press briefing.

Thomas appeared on CNN's Situation Room to explain why she does not accept the President's answer.

I loved her jab at Wolf to ask Bush why he doesn't resign. Of course Wolf brushes it off with "That was another time and this is another story"

I guess a blow still trumps a war!

George W. Bush invaded Iraq so he could be a War President, and gain stature and impress his dad. Its no fun to be President and not have a war. Its much more prestigious to be a "war president'. Never mind that 100,000 people are now dead; bush gets to live his dream....

My husband was snowed out today & so we were at home together watching the press conference.

When Helen Thomas, the Grand Dame of the White House press corp FINALLY got called upon to ask her question after all these years of being shunned by Pres. Boob because he's afraid of her questions--we were CHEERING for her outloud!

She stuck it to him too.

Pres. Boob answered, "Well...I think your premise is faulty....."
She asked him why DID we go to war in Iraq--now that we know all the reasons he gave publicly turned out to be false, & now that we know his Administration meant to go to war immediately after the Boob got into office.
It was fun.

Bless Helen Thomas. I wonder... is she the first person ever on a major news network to mention "Project for a New American Century" in a discussion about Iraq? I really wouldn't know. My god, how refreshing it was to see that though!

Makes me cry. Beautiful little old lady is the only one who will get real with the fascist chimp. HELEN THOMAS is a patriot.

My favorite part was when she smacked Wolf upside the head when she told him, "come back" meaning, come back to the side of truth. Then she reminded him he asked Clinton if he should resign. Wolf immediately changed the subject.

Helen Thomas repersents, for me, the spirit of journalism that good patriots must nurture and support. There are a few up and comings, can't think of any names in MSM, but on the blogs, well, they can't get into a press briefing unless they are bald and named Gannon....

Speaking of journalists falling down on the job; one of the worst slackers is WOLF BLITZER; the man just accepts anything bush says or does thinking he is some holy religious figure....Blitzer should resign

Helen Thomas is the best. Since she did mention the PNAC, I wonder if anyone else will pick up on that. I doubt it but it's out there now.

I hope Madame DeFarge has knitted Wolf Blitzer's name into her list....

I didn't watch the press conference, but I saw a clip of Helen Thomas's question. You could almost see the thought going through Bush's mind - "I really, really, REALLY miss Jeff Gannon"

Helen deserves kudos for her willingness to sacrifice her dignity for the sake of Democracy & Truth.
She said she let it be known at the Gridiron dinner that she was sorry that her private opinion of Bush (that he is the worst President in our history) got into print. Notice she did not apologize for her opinion, but only for the fact that it got into print, because it was meant to be a private opinion.

She had to do it so that she could improve her chances of getting to question Pres. Boob at the next press conference, & it worked!

We all benefit from her efforts.

What a great reporter & patriot!

"In the beginning of a change the patriot is a scarce man, and brave, and hated and scorned. When his cause succeeds, the timid join him, for then it costs nothing to be a patriot" - Mark Twain

Lets hope Hellen's patriotism isn't burried by the likes of Blitzer and the other little piggies of the press... too fearful to speak out, lest thier space at the feeding trough be given to another.

Hellen Thomas may be old and frail, but she has more balls than the entire press corps. We need more of her ilk!

PNAC, agenda for war - call it like it is!

Blizter - what a spineless wimp.

Wolf Blitzer is such a shitbag. His questioning is worthless, and he's got his nose so fucking far up the arse of this administration. He tried to bring in "Well, what about 9-11..." Why doesn't he just suck the president's dick. At least then we might have a precedent for impeaching this son-of-a-bitch. What a fucking ass loser.

I'm glad Helen smacked him down on that, and I'm glad she got some play at the press briefing. But it sure seemed like she had to give a reach-around to get it. I'd have rather she said "Eat shit. You're the worst president ever, 99% of the world knows it, and I'll be goddamned if I ever apologise for it. If that means you don't call on me, what the fuck ever you semi-hard lump of walking shit. I'm still getting paid for being here."

Where has that guy from NBC been lately...forget his name, but he's been a bulldog lately also (except I haven't heard from him for a while.)

God, these reporters all know what a fucking crock of shit they're being handed on a daily basis. You know what needs to happen? Next WH press briefing...nobody should show up. Empty. Shrub gives his monkey ass bullshit to...nobody. Priceless.

David Gregory...that's who I was thinking of.

Hey Wolf, how does it feel to talk to a real journalist?

Does Wolf Blitzer Owe His Career to Pat Robertson?

Helen is a national treasure.

Just saw this for the first time today... WOW, ya'll , spread this clip around everywhere. Helen kicked some PNAC butt!