$2 Trillion Coronavirus Bill Proves It's Not About Lack of Money: 'BradCast' 3/25/20

Guest: Economist Stephanie Kelton on 'The Deficit Myth' and why we can't have nice things; Also: What's in the record spending bill; Guvs dismissing our idiot President...

The President Should Not Be Worse Than the Disease: 'BradCast' 3/24/20

News headlines and then, most importantly, live callers -- some of them heartbreaking -- on The BradCast, your 'Stay-at-Home' Radio Companion...

Sunday 'Roll Models' Toons
Once again, PDiddie hordes the best of this week's political toons in his latest collection... 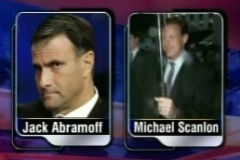 Last week, über-lobbyist Jack Abramoff's former partner Michael Scanlon pleaded guilty. As part of the plea deal, Scanlon admitted that he conspired to bribe public officials and defrauded several Indian casinos of millions of dollars. Scanlon has agreed to cooperate with the prosecution and pay restitution in the amount of $19 million.

Yesterday, on the Sunday talk shows, they were abuzz about the spectre of a scandal which threatens to overwhelm Washington. We've got a video compilation below.

U.S. News & World Report has learned that Scanlon is now the star witness "in a probe that threatens to ensnare officials throughout the nation's capital." A source reports that the scandal could take out a least a dozen in Congress.

John McCain is leading the senate investigation into Abramoff which has been also linked to the anti-government crusader Grover Norquist. According to an article in the Boston Globe, Norquist is now attacking McCain.


Now the conservative activist is on the warpath against Senator John McCain, Republican of Arizona, who is leading the Senate investigation.

After ATR turned over its e-mails, Norquist charged, McCain tried to ''steal our donor list."
...
Norquist then accused McCain and Senator Byron L. Dorgan, a North Dakota Democrat, of discrimination by targeting lobbyists who worked for Native American tribes. Abramoff and his partners collected $82 million in fees from Indian tribes and their casinos over four years.
...
When we asked the senator's staff for a comment on Norquist's fusillade against McCain, his chief of staff, Mark Salter, had a lot to say. "In Norquist's world, the truth is for suckers. And it's as pointless to respond to him as it would be to respond to some street-corner schizophrenic," Salter responded.

We've put together clips of discussions on the GOP's Abramoff scandal from this Sunday's editions of ABC's This Week and Fox News Sunday. All the pundits seem to agree that this investigation could become a big problem for Republicans.

(If anyone feels like typing up a partial transcript, let me know, and I'll post it here.)

READER COMMENTS ON
"GOP's Abramoff Corruption Scandal is Heating Up"
(10 Responses so far...)

It's discrimination to target lobbyists who worked for Native American tribes?

That's where the fraud is! If a lobbyist represents a bank or drug company, and conducts business honestly, should investigators target that person just to avoid the appearance of discrimination?

What Norquist is saying amounts to this: If a black person standing 6'5" and wearing army fatigues was seen leaving the scene of a robbery, and detectives went looking for a tall African-American, they'd be guilty of discrimination (or racial profiling). I never thought I'd hear a conservative Republican talk like that...but I guess when things get really desperate, they'll say any damn thing that comes to mind.

Yeah, just like Limpballs ran to the ACLU when his drug records were being looked into, bunch of snivelers when they get busted, aren't they

A Republican saying Norquist is as weird as a street-corner schizophrenic...wow, the times they are a changin'.

OH God....You, who are SOOO Big....So Monumentally HUGE in your Divine Giaganticism....PLEASE!!! I beseech thee most humbly, please let this Repugnantcan Scandal lead to the Other Repugnantcans (especially in Ohio) involved in the Rigged Elections of '04....so that they are fully exposed as the lying, cheating, thieving bastards they are....so that the "election" results are voided, Bush's Entire Criminal Enterprise arrested and an interim executive branch might be appointed until we fix our shit....
Amen

Looks like it could take out Rep. John Doolittle as well. Keeping toes and fingers crossed.

I think it's telling that the Pugs keep trying to inch in "when a special interest group gives money to a campaign, that's not bribery.. stop trying to criminalize politics!".. Yet, they keep trying to stampede -away- from "Here's a nice $500 dinner and $300 round of golf.. Oh, and by the way, can you vote for -this- tribe and -against- that tribe tomorrow? . . . [2 wks pass] Here's a nice $650 set of tickets for this ball game.. and $250 pair of shoes to wear.. and a $1200 ride on a jet to the game.. oh, and can you make some noise in congress about this cruise line I want to buy, I need the price driven down"..

One is "giving generic funds to support candidates that 'tend to believe a certian way", the other is "buying specific votes and influence".. One is "campaign contributions", the other is "bribery"..

Don't let up, don't back down, don't let these criminals get away with this. Put them all in prison for running an organized crime ring.

The beat goes on ... neoCons to neoConvicts ... it is a natural progression.

Power is corrupting these folk because the antidote is humility and truth telling. They reject the antidote to the toxins contained in power, saying it is for suckers, then they find themselves in jail.

It is looking like '06 is the year of cleansing ... so long as the unverifiable mad dog election machines of Diebold are purged and put back into the garbage where they came from.