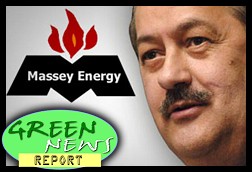 IN 'GREEN NEWS EXTRA' (see links below): Your shower wastes water. Here's what you can do about it; Anti-pollution documentary taking China by storm; NYC could see 6 feet of sea level rise; Revealed: secret plan to confuse public on climate change launched in 1998; Canada pushing First Nations to give up land rights; Christie's office pushed sweetheart pollution deal for Exxon; McDonald's to limit antibiotics in chicken... PLUS: K-cup founder regrets the 'environmental scourge' he invented... and much, MUCH more! ...

« PREVIOUS STORY "Gag Order Lifted in Criminal Case Against 'Dark Lord of Coal Country' Don Blankenship"
» Go to The BRAD BLOG front page «
"Will the Photo ID Legal Mess of 2014 Be Repeated in 2016 or Resolved by SCOTUS Now?" NEXT STORY »

Thanks to you and Brad.