While prepping for tonight's Mike Malloy Show (which I will be busy guest hosting all week), here are just a few of the items which caught my eye so far today...in no particular order...

So what's on your radar?

In addition to some of the above possibly coming up for discussion tonight, we will definitely be discussing the U.S. Chamber Plot (which was to have targeted, among others, myself and my family) with my guest U.S. Rep. Hank Johnson (D-GA) who is trying to see some accountability in that horrific affair after House Republicans refused his request for investigative hearings into the matter.

Please tune in at 6p PT (9p ET) tonight --- and all week! We'll have live listening links and a lively chat room right here at The BRAD BLOG during those hours as usual! 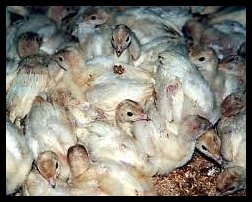 While the recent recall of more than a half billion eggs in the wake of some 1,470 Salmonella infections has triggered a renewed focus on the dangers posed by factory farms to human health and to the environment (see videos below), the discussion stops short because factory farms are but one symptom of the deadly consequences of a perverse ideology whose sole purpose is to expand the already obscene wealth of less than 1% of the population at the expense of a healthy economy, community, the environment, peace, and the very ability of our planet to sustain life...

A reminder how helpful screenshots of election results taken from official websites on election night and in the days following, can potentially be, can be found in our recent exclusive on the still unexplained results from the Monroe County, Arkansas, May 18th primary, where thousands of votes "disappeared" in the days after the election.

If you don't know how to take a screenshot, here's the quick primer (at least on a PC): While viewing the page in question, hold the ALT button and hit the PrtScreen button. Then paste the ensuing clipboard graphic into a graphics program, and save with a filename that includes both the date and time the shot was taken. Hopefully someone else can explain how to do that on a Mac in comments.

Of course, as you hear or read of problems at the polls throughout the day, feel free to email us with details and URLs, and we'll do our best to look into it.

On the more-political-less-Election-Integrity side of the equation, The BRAD BLOG's resident attorney/historian-in-chief Ernest Canning has offered a number of recent, noteworthy articles on matters related to the ballot out here in CA, perhaps they're worth re-linking this morning. Of particular interest --- even to readers across the country --- should be the top item below, concerning Prop 16, and the deceptive way in which a huge corporate power is attempting to deceive voters with the use of millions of dollars to support a phony campaign.

For that matter, in reviewing the articles below, they each speak to one common element: the outlandish power that money holds, now more than ever, when it comes to our "democracy"...

Yet another state backs the conservative, Constitutional principle of equal protection under the law for all, as Maine's Gov. John Baldacci signs the legislature's newly approved bill, allowing for marriage equality in the state.

In the past, I opposed gay marriage while supporting the idea of civil unions. I have come to believe that this is a question of fairness and of equal protection under the law, and that a civil union is not equal to civil marriage.

Maine's recognition of equal justice for all, follows Vermont whose legislature last month over-rode a gubernatorial veto to pass a marriage equality law. Prior to that, same sex marriages were recognized as Constitutionally protected by Supreme Courts in Iowa, Massachusetts, Connecticut and California. In all of the state Supreme Court decisions, it was a Republican-appointee who wrote the majority opinion.

California's court finding has since been overturned by Prop 8, the constitutionality of which is currently being challenged. For the moment then, five states in the union now protect the right of same sex couples to enjoy the same rights that couples of opposite sexes enjoy.

( 5 so far... )
Article Categories: Rights And Freedoms, Marriage Equality, LGBTQ, Maine
New Docs: Exec at NH's Diebold Vote Counting Firm Convicted of Narcotics Trafficking
Ken Hajjar, Director of Diebold's Exclusive Sales & Service Provider in New England Pled Guilty to Criminal Charges in 90's
Does the Sec. of State of NH --- or CT or MA or VT or ME --- Even Know About It?...
By Brad Friedman on 1/9/2008 8:47pm PT

Does the Secretary of State of New Hampshire have any idea that a key executive in the private firm that programs and "counts" 80% of the state's ballots on hackable, error-prone Diebold voting machines is a convicted narcotics trafficker?

In 1990, Ken Hajjar, the Director of Sales and Marketing for LHS Associates, and childhood friend of company owner John Silvestro, was arrested and pled guilty to charges of "Sale/CND" (Sale of Controlled Narcotics/Drugs) which earned him a 12 month sentence, according to documents received via a public records request and posted this evening at BlackBoxVoting.org.

Hajjar himself is also the the guy who showed up in BRAD BLOG comments, at one point last summer, to let us know we are "totally full of shit" and "deluded...paranoid...looney idealogues" to boot. Well, maybe. But at least we don't have a secret felony conviction, even while owning almost complete control over every vote cast and "counted" in New England.

The newly-revealed felon's impolitic rant here earned him the boot from the Secretary of State of Connecticut, where he is now barred from working, as guest blogger Dori Smith pointed out in another BRAD BLOG story last November, detailing the horrors that are LHS Associates, Silvestro and Hajjar.

When Smith asked Hajjar about his admission that he and his company regularly replace voting machine memory cards (the keys to the kingdom!) at will, in the middle of elections, he told her, "I mean, I don't pay attention to every little law."

Go check out Harris' new article tonight, which includes more details and the arrest record --- along with the note that "until recently, LHS employees were listed on the company Web site. Now the pages identifying who programs New England voting machines have been taken down."

Now ya know why.

Even if you still don't know who actually won the New Hampshire Primary.

(What say we actually count the ballots and put the questions to rest? Just sayin'...)

For good measure, we'll also post again below the rare video footage of Silvestro, along with the first-hand BBV footage of the infamous and stunning Leon County, FL hack of a Diebold optical-scan machine --- the very same ones used across NH on Tuesday --- and the one originally seen in HBO's Emmy-nominated Hacking Democracy...