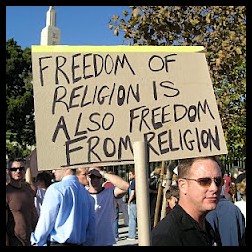 A federal lawsuit filed by the Calvary Chapel of Thousand Oaks seeks to test the legal line drawn by California regarding the boundaries of church and state.

Under the Golden State's Fair Employment and Housing Act (FEHA), churches are permitted to discriminate in hiring practices based on their religious beliefs only within the confines of non-profit institutions --- a line that recognizes that government has no role in a religious institution's selection of a priest, minister, rabbi or imam. Thus, for example, laws banning discrimination on the basis of gender do not prevent the Catholic Church from limiting the priesthood to adult males.

But the Calvary Chapel now seeks to obliterate the line drawn by the state FEHA law. It purchased the Little Oaks School of Thousand Oaks, a for-profit, previously non-sectarian private school and subsequently fired two teachers who refused to make statements of faith and obtain references from a pastor. The teachers' objections, one of whom had been the director of Little Oaks' preschool, were on religious freedom grounds.

Facing a likely legal challenge under state law, the church filed a lawsuit in U.S. District Court against the teachers and their attorneys as a preemptive strike in hopes of preventing the teachers from seeking redress in state court under FEHA.

Richard Kahdeman, an attorney representing the church and school, is quoted by the Ventura County Star, charging: "The question is ultimately, do the nondiscrimination rights of the teachers under state law trump the religious rights of the school under federal law?"

The L.A. firm representing the teachers point out in response that the state FEHA law has been upheld hundreds of times in both state and federal court. In a statement, they characterize the school's lawsuit as an attempt to "avoid the consequences of their illegal and discriminatory practices."

"We're a Christian school," Rev. Rob McCoy, pastor of the church and headmaster of the school, told the VC Star. "We were coming to the point where we were establishing a Christian curriculum. We wanted to make sure teachers subscribed to that faith."

But the teachers' attorney said the pair "did not believe they should be required to obtain a pastoral reference in order to continue their employment." They also "expressed surprise that the school contends California law is unconstitutional yet did not include the state as a defendant."

The lawsuit reflects the latest attempt by a religious group to break down the long-standing firewall between church and state. If organized religion is permitted to purchase private, for-profit businesses (only non-profit institutions are allowed discriminatory hiring practices under the state law) and then discriminates on the basis of their religious beliefs, what's to stop individual owners of businesses from discriminating on the basis of their own personal religious beliefs? If the Ku Klux Klan, which professes to be a Christian organization, gains ownership of a private business, should they be permitted to discriminate in employment on the basis of race on the grounds that their religion calls for "whites only?"

And what about the religious freedom of the fired teachers? The First Amendment's "freedom of religion" also entails "freedom from religion." Courts have found that people have a right to believe in a religion of their choice or to not believe at all. In its profit/non-profit distinction, it seems California attempted to draw a reasonable line between church and state, one that, if Cavalry Chapel is successful in its suit, could ultimately be breached.

The chapel's Rev. McCoy agrees that the results of the suit could have major national implications. He believes it is his church, not the teachers, who are being discriminated against. If the suit fails, he charges, "any for-profit company that is owned by a religious organization will not have the religious freedom to exercise their beliefs."

McCoy's contention, however, begs the question as to whether the imposition of his religious beliefs, in a for-profit setting, unlawfully intrudes upon the rights of employees (teachers, in this case) to believe, or not believe, as they see fit without a discriminatory infringement upon their liberties as the Calvary Chapel of Thousand Oaks is now asking the U.S. Government to approve.

READER COMMENTS ON
"Freedom of and from Religion to be Tested in Federal Lawsuit by California Church"
(14 Responses so far...)

Those poor christians. Always under attack by the forces of secular big bad gubmint evil, a relentless persecution by soul sucking demons straight from the pits of hell itself. You know. Laws.

How embarrassing. Can the religious join the rest of us in the 21st century please? There are real problems to solve.

It seems to me the District court should throw this suit out. The church did what they did with regard to the teachers and until the teachers do something about that, the church has no standing to complain. At this time, the church's right to discriminate have not been violated. It would seem to me the church would have to lose a FEHA case brought by the teachers before they had any standing to sue for redress.

If it does go ahead, the church, like any other religiously oriented employer, engages in commerce and therefore gives up its rights to a religious exemption.

They were NOT fired. Do your homework! The 1st amendment says NOTHING about for profit or not for profit - the press is for profit and they enjoy their freedoms under the 1st amendment - The California State Constitution protects the school's religious liberties but FEHA does not - the school did the right thing. Seriously $150,000 for each teacher? One teacher didn't even work there an entire year.

Can a private, for-profit newspaper fire an employee because they are the member of a minority? Because they are a Christian, Muslim, Atheist or Jewish?

Think before you write, please!

They were NOT fired.

The teachers lost their jobs in 2012 after refusing to provide a statement of faith and a reference from a pastor.

Ernest,
They were NOT fired - I am an eye witness to the event. Believe it or not newspapers can be biased and get a story wrong. The story in the VC Star is good but this fact is wrong. I am the Rob McCoy in the story. Your question in your first response is no - they cannot. My point is that the 1st amendment says nothing about for tax or not for tax. It is a freedom clearly defined - now if we want to do away with the freedom than so be it. Until then it is a freedom we hold to.

So a religious taxable entity (which seems to be an oxymoron- as religious institutions are tax-exempt because of their religious status) should have the freedom to discriminate? If that is your point then a non-religious/atheist/non-claiming for-profit entity should also have that right. Right? You can't have it both ways.

Rob, I am curious about two things:

If the teachers were not "fired" as you claim, what is their employment status. Do they remain employed by the Little School of the Oaks?

If not, has their employment been terminated? If so, was that termination voluntary?

Also, since you concede that a for profit newspaper does not have the right to terminate an employee's employment on the basis of their religious beliefs, what makes you think that you have a right to discriminate where the newspaper does not?

I believe, Michael G @8, that you've misread the article. It does not state that the Calvary Chapel of Thousand Oaks is a for-profit, religious institution. It states that the school that the church purchased is a for-profit, private school.

The military church, which is vast by comparison, routinely practices discrimination and intimidation against soldiers who are not religious in the military way.

Evidently it is "legal" for them to do so since nothing is done about it.

Ernest,
The teachers are on a year to year contract. They opted not to sign the contract for the next year. My point is that the 1st amendment doesn't qualify for profit and not for profit - there are for profit religious newspapers that discriminate based on religion.

Rob: When you say the teachers "opted not to sign the contract for the next year," did that contract include a provision that required them to declare their adherence to the Christian faith? Did it require them to submit a pastoral reference?

If it did, did their previous contracts with the Little Oaks School contain such a requirement?

If the answer to the first two questions is in the affirmative, I suspect that there would be a significant issue under California law as to whether the termination of their employment amounted to a constructive involuntarily discharge.

If this was deemed a constructive involuntary discharge, then the Ventura County Star article would be more accurate than your denials.

Ernest,
That is the point of the case. As I said before the article was good the journalist was fair and the contention is what you point out. I contend they were not fired and they contend they were but the court has yet to decide - thus the article would prove more accurate if they stated that. I appreciate your civility by the way as well as your thoughtful insights. Thanks for replying.
Rob