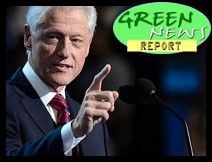 IN TODAY'S RADIO REPORT: Bill Clinton makes the green case for Barack Obama at the DNC; PLUS: DOJ excoriates BP for "willful misconduct" and "gross negligence"... All that and more in today's Green News Report!

Here's 'weather report' everyone should view.

Environmental issues and election fraud going on at the same time in Vt.

They don't want to be another Fl.