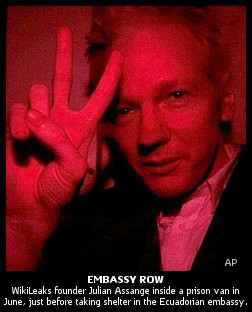 At a press conference in Quito, Ecuador's foreign minister Ricardo Patino strongly denounced the threat received from the U.K.: "Today we've received a threat by the United Kingdom, a clear and written threat that they could storm our embassy in London if Ecuador refuses to hand in Julian Assange."

Ecuador's decision to grant asylum in the face of the U.K.'s threat have not only triggered a diplomatic row but have threatened to tear apart the very fabric of international rule of law, according to experts. Where one could anticipate Sweden's denouncement of Ecuador's asylum decision as "unacceptable", as it summoned Ecuador's ambassador to Stockholm, the British threat to storm Ecuador's embassy was described by University of Australia Professor of International Law Don Rothwell as "extraordinary" and a "significant violation" of Article 22 of the 1961 Vienna Convention on Diplomatic Rights that could "find its way before an international court."

As Ecuador's foreign minister issued an angry denouncement of the U.K. threat, noting that his nation was "not a British colony", American filmmaker Michael Moore called on his friends in the U.K. to mount a protest of the U.K. threat outside Ecuador's London embassy. Occupy Wall Street protesters called for "people to take part in a 24/7 occupation of the British consulate in New York." Reuters reported a "clash between protesters and British police outside of Ecuador's embassy."

But, as discussed in a must-read opinion piece by Mark Weisbrot of the UK Guardian, the very concept of an international rule of law is open to question given the impunity by which the United States and its allies have operated both at home and abroad...

Yet, now we see the British government threatening to engage in the very same lawless behavior in order to seize an individual who has never been formally charged with a crime. To the contrary, as Weisbrot correctly notes, Sweden has sought extradition solely to question Assange --- an extradition which former Stockholm prosecutor Sve-Erik Alhem described as "unreasonable and unprofessional, as well as unfair and disproportionate" because Assange has always been available to answer questions in the U.K.

In fact, according to Weisbrot, an offer was extended for Swedish authorities to question Assange inside Ecuador's London embassy.

Weisbrot argues that the real reason why Ecuador's asylum decision has drawn an unprecedented threat by a democratic government to invade a sovereign embassy lies in the fact that Ecuador, by granting asylum, has recognized that Assange has demonstrated a valid fear of being persecuted by a supposedly democratic United States government, which claims to be the world's foremost defender of human rights.

While claims of U.S. virtue have long been undermined in the international arena by its "disregard for the human rights of the victims of U.S. wars and foreign policy, such as the three million Vietnamese and more than one million Iraqis who were killed," Weisbraut explains, it has clung to the notion that human rights were always observed "within its borders."

To that claim, Weisbrot offers this powerful statement:

Today, the US claims the legal right to indefinitely detain its citizens; the president can order the assassination of a citizen without so much as even a hearing; the government can spy on its citizens without a court order; and its officials are immune from prosecution for war crimes. It doesn't help that the US has less than 5% of the world's population but almost a quarter of its prison inmates, many of them victims of a "war on drugs" that is rapidly losing legitimacy in the rest of the world. Assange's successful pursuit of asylum from the US is another blow to Washington's international reputation. At the same time, it shows how important it is to have democratic governments that are independent of the US and – unlike Sweden and the UK – will not collaborate in the persecution of a journalist for the sake of expediency.
* * *

READER COMMENTS ON
"Undaunted By U.K. 'Threat' To Invade Its Embassy, Ecuador Grants Political Asylum to Assange"
(20 Responses so far...)

Hooray! Kudos to Ecuador! Now it should grant Assange Ecuadoran citizenship and make him an Ambassador to the U.K., just to further bolster his protection from the West's imperialism.

Michael Rattner of the Center for Constitutional Rights believes the U.S. is the “hidden hand” behind the UK threat.

I've never quite understood what kept the Brits from extraditing Assange to the U.S. Why is Sweden more dangerous for him than England?

Go Ecuador! Assange is the king of transparency

Hey man, i had an interesting afternoon. A local place where I swim, where the last time I was there they told me they did not have my bank card...just produced my bank card and told me I had not payed my bill. After talking to my partner, he can verify we did. He witnessed me tell the home land security guy that I had info on creepy arian shit, that a kid of one of my best friends has put through rehab many times... and the last time, we were hoping the judge would through him in jail but didn't, told us stuff about drug and gun running. Well this dip shit tells me, "Oh no, I don't handle anything like that you have to call the fbi." Now, I ask you, as a citizen wouldn't you like your local (fed) law enforcement to work together with people who are supposed to protect us? Well...I'm still hearing crickets out here in pennsyltucky!
And again, thank GOD and GODDESS for Julian's new found allies. May we send the same to Bradley!

At least some fucking follow up folks, but I must say my local police have been good.

"I've never quite understood what kept the Brits from extraditing Assange to the U.S. Why is Sweden more dangerous for him than
England?"

After the exposure of the U.K's role in helping Bushco to falsify a case for the invasion of Iraq the Brit elites don't dare let it be seen as if the U.K. is being Uncle Sam's bitch yet again.

The U.S. has not charged Assange with anything yet. And it may be difficult for them to do so officially for a variety of legal and practical reasons... officially.

So if the Brits just handed Assange over to Obama they'd have to explain to their people exactly on what grounds that had done so... and that would not end well for the current government.

And so, the Swedes.

The Swedes have a (highly questionable) case against Assange... and they have a documented history of handing people over to the U.S. no questions asked.

If Assange goes to Sweden he will without a doubt end up sitting in a legal black hole somewhere in the U.S.

ZAP@#8 -
I suppose you're right, but good grief what weird logic. So if I understand properly the Brits are willing to risk scorn and ridicule by invading a sovereign embassy to kidnap an Australian citizen seeking asylum so they can send him to Sweden for questioning about a rape, rather than just send him to the U.S. for questioning about espionage or cyber-terrorism or some such. Perhaps someone should alert the U.K. that if Assange is sent to Sweden there's a very good chance the Girl with the Dragon Tatoo may come to his aid. Hah!

Perhaps someone should alert the U.K. that if Assange is sent to Sweden there's a very good chance the Girl with the Dragon Tatoo may come to his aid.

I would want some good journalist to find the women. I would really like to hear their whole story at this point myself. Sorry ladies, but the truth should be known, an I know what crazy pressure can be like, but truly, you should not subccumb to fear.

I believe that contains some of the answers you are looking for.

OR a thousand Guy Fawkes show up and surround everything. Shades of V. Time to get serious about the Tyranny of these murderous a_holes using 30 mm AutoCannons on innocent Civilians. Or perhaps everyone has forgotten?

Please help promote this link wherever you can; if you believe in freedom of expression and freedom of the press. Julian

Assange for the Nobel prize for freedom of the press:

Lets see how "Noble" the Norwegians and their righteous Swede neighbors are or claim to be, since they offered Obama the Nobel peace prize!

Thanks for the link, Ilios. I've signed and tweeted. Hope others will as well.

Hey Ernest, when I tried to link to the article you left for me to read, this came up:

is there a link prob or is that the correct article?

And then there's this:

Okay one last post before I finish weeding and completing other jazzaroo, for my good friends Becky and another Clyde:

People really need to stop lying about this "charging" thing. It is a misrepresentation of Swedish law. Everything has been done by the book on that account.