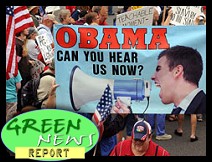 IN TODAY'S RADIO REPORT: Massive protest at the White House against massive pipeline across the country; Oklahoma quakes rattle the heart of fracking country; Record spike in global emissions; 2011 breaks all records for record-breaking weather disasters; PLUS: Massive crack discovered in Antarctic glacier... All that and more in today's Green News Report!


The October 29 snow storm brings the 2011 tally of U.S. billion-dollar weather disasters to fourteen, thoroughly smashing the previous record of nine such disasters, set in 2008.

« PREVIOUS STORY "Touch-Screen Voting Machine Fails in NJ: Straight-Ticket Selection Chooses All the OTHER Candidates"
» Go to The BRAD BLOG front page «
"Hundreds of Voters Missing from E-Pollbooks in VA County Forced to Vote on Provisional Ballots" NEXT STORY »

Isn't it interesting that the "monster" increase in CO2 emissions was accompanied by the largest oil industry profits, ever!