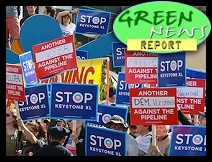 IN TODAY'S RADIO REPORT: The buck stops with President Obama on the proposed Keystone XL Pipeline; Spontaneous nuclear reaction at the Fukushima nuclear power plant; Belgium to phase out nukes, too; This week's toxic fossil fuel spill, now in Lake Michigan; PLUS: Occupy your Junk Mail! ... All that and more in today's Green News Report!


The plan for a shutdown of the three oldest reactors by 2015 and a complete exit by 2025 is conditional on finding enough energy from alternative sources to prevent any shortages.

QUOTE OF THE DAY:
“THE Devil knew not what he did when he made man politic…” Shakespeare
11-2-11
The 2011 Fall season, broadcast news media makes me laugh. Here I am longing for in-depth news or investigative reports about a whole multitude of vital issues and timely subject matter… but all I get is the latest Herman Cain sound bite. Wow, ANOTHER rich, Republican @$$*** dishing out pathetic bs… THAT AIN’T NEWS! Like I always say: “…responsible journalism is dead as the sperm on Monica Lewinsky’s blue dress”.
lol
NOTE: (By the way, I see TV anchors/hosts never touched on the NEWS about Cain receiving campaign contributions prohibited by Federal regulations) Damn regulations, right?


Concerned Citizens such as myself have more on our minds beyond which puppet candidate the Republican Party will put up against President Obama. We’ve got a political/economic system to OCCUPY! (see cyberbitchslap2.blogspot.com)

GOD forbid we talk about the 50 MILLION Americans struggling below the poverty level… OR legislative obstructionism… OR do an investigative report on the Corporate Crime Wave that gripped this nation during the Bush/Cheney disaster…
(ARREST George W. Bush!)

OR Ask vital questions such as WHY are Republicans leading the charge for voter suppression, union busting, debtor’s prison and repealing CHILD LABOR laws? (REALLY?) These un-American ****’s want to get rid of an American Institution, the POST OFFICE for GOD sake…

NOTE: (Post office motto Inscribed on post office on 33rd St. + 8th Ave, NYC:
“neither snow, nor rain, nor heat, nor gloom of night stays these couriers from the swift completion of their appointed rounds” HERODOTUS 503 BC.
These hero’s didn’t count on a destructive force known as a lame duck Republican Congress, lol, remember 2006?)

BLAME YOURSELF!
State and Local government Republicans are doing EVERYTHING they can to keep the PEOPLE from voting. What better definition of TRAITOR than those who would pervert the election process? The American PEOPLE need to rise up and make demands to get the money out of our politics. We MUST make demands for national voting standards that can’t be corrupted by any Party fanatics.

I think most people on the Left are missing the big picture here. THIS ISN’T ABOUT PRESIDENT OBAMA doing the job of SAVING the nation by himself… THIS is about FORMING A COALITION to stop the Republican Party satan sandwich makers. (lol) Since 58.4% of the American PEOPLE didn’t vote in the last election… community voter registration workshops are a big deal, RIGHT?

Tip O’Neil said it best “…all politics are local politics”. That’s where elections are really won, focus, involvement and energy from the grassroots. Otherwise those conservative criminals on the Supreme Court rig the game with “Citizens United”. I thought legislating from the bench is a no no procedure boy? What about Clarence Thomas and his lobbyist wife? Maybe someone should OCCUPY the Supreme Court, right?

I think what the Obama/Biden Administration accomplished is genius. The way I see it is President Obama has given the Republican Monkeys enough rope to hang themselves with. If nothing else they’ve exposed themselves to the wrath of GOD! Anyone with half a brain tied behind their back can see the evil nature and low grade thought processes of Republicans.

Liberals need to recognize this, SUPPORT their President and join the fight to take power away from Republicans before they completely destroy the USA. VOTING for the Democratic Party is our ONLY way to defeat these traitorous Republicans. THERE IS NO OTHER WAY at this time. Liberals must understand it’s easier to do a hostile takeover of the Democratic Party than get a Third Party candidate elected or start a revolution? (Liberals don’t have the balls for a real revolution, yet…)

The REAL fight is right here at home.
I’m not ashamed to say a few fanatic degenerates who perverted Islam don’t scare me near as much as those FOOLS who believe Capitalism can survive without ETHICS, RESPONSIBILITY, ACCOUNTABILITY!

I think it is more than a proposal, they are already banging, if you know what I mean.

The marriage to oil made in hell is in full "schwing", as Wayne of Wayne's World would put it.