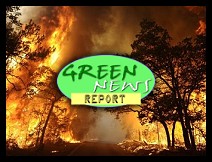 IN TODAY'S RADIO REPORT: Texas is roasting! (and Rick Perry is still denying); 2011 disasters are getting expensive; Climate science is vindicated --- again; PLUS: Obama calls for infrastructure jobs - again - but undercuts clean air rules ... All that and more in today's Green News Report!


This is as uncontroversial as saying the sky is blue, in the sense that the atmosphere’s behavior is implicitly shaped differently than it was before the industrial revolution raised the concentration of carbon dioxide by more than a third.
...
But the important question for society is how much climate events that matter to people are being meaningfully shaped by that rise in greenhouse gases. In the case of American hurricane risk, the science says there’s a negative trend in storm number, while storm energy and rainfall probably are rising.

« PREVIOUS STORY "'Inside the Koch Brothers 2011 Summer Seminar': Part 1 of My 2-Part Exclusive at MOTHER JONES"
» Go to The BRAD BLOG front page «
"Quick Follow-Up to Part 1 of Our Koch Exclusive" NEXT STORY »

The wildfires in Texas are devastating but heat and fire (climate change) have been a big problem for the Lone Star State for several months.

Perry does denies climate change along with other flaws but was off playing Presidential candidate when he should have been home taking care of state business.

I wrote about this in an article post on HuffPost whidh I think will be of interest to all liberals and independents:http://www.huffingtonpost.com/jim-worth/perry-fiddles-while-paris_b_935733.html