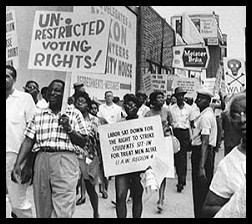 In its letter, the ACLU argues that polling place photo ID restrictions have "the potential to prevent one, and only one, type of voter fraud --- voter impersonation...a person...going to a polling place on Election day, fraudulently requesting a ballot under the name of a qualified voter of that precinct who has registered to vote but has not voted prior to the fraud...The ID requirement will not prevent any other type of fraud, such as double-voting, felon voting, non-citizen voting, absentee fraud, registration fraud, vote buying, or negative vote buying."

The ACLU notes that the GOP proponents of the bill failed to "conduct any studies to determine the existence...of voter fraud" and cited "out-of-state statistics regarding the number of people who are registered in more than one state and the number of felons who are registered to vote" --- statistics that "are irrelevant" because these forms of voter fraud "could not be solved by" the photo ID law.

The ACLU, in support of its claim that GOP claims of "voter fraud" are but a pretext for voter suppression, cites an item The BRAD BLOG covered on April 11, 2007 after The New York Times revealed that the Bush-appointed members of the U.S. Elections Commission (EAC) first suppressed and later altered a draft report which concluded that GOP claims of "voter fraud" were overblown.

It also points to "The Truth About Voter Fraud," the 2007 study by the non-partisan Brennan Center for Justice at NYU Law School "which found that 'voter fraud is extraordinarily rare' but did not find a single incidence of voter impersonation" --- for an obvious reason:

The ACLU, thus, underscored the point made by Robert Brandon of The Inquirer that "photo identification at the polls is a solution in search of a problem."

In Harper vs. Virginia Board of Elections (1966), the U.S. Supreme Court invalidated a poll tax, stating:

We conclude that a State violates the Equal Protection Clause of the Fourteenth Amendment whenever it makes the affluence of the voter or payment of any fee an electoral standard. Voter qualifications have no relation to wealth nor to paying or not paying this or any other tax.

The ACLU letter contains significant statistics that suggest that South Carolina's new photo ID law operates as an illegal poll tax, especially for the disproportionate number of African Americans who live below the federal poverty level.

In a recent article here, Brad Friedman exposed the hoops that a Wisconsin voter had to jump through in order to obtain a newly required photo ID in that state, after they hastily passed a similar law in advance of the upcoming state Senate recall elections.

While the photo ID is to be issued for free in the Palmetto State, the certified documents needed to obtain the photo ID are not. A certified copy of a birth certificate runs from $12 to $17. A passport comes at a cost of $165. The cost of naturalization documents runs from $345-$460.

For most voters, the ACLU asserts, DMVs are not within walking distance (remember, if you don't have a state-issued Photo ID already, it's very likely to be because you don't have a drivers license at all) and South Carolina's public transportation is less than adequate. Moreover, since the law requires that voters appear at a DMV in person and the state does not mandate paid leave for the purpose of obtaining the ID, an employee not only faces lost wages but possible loss of a job if he or she takes the time off to get the photo ID.

There can be little question but that the case made by the ACLU with respect to South Carolina could easily be applied to Florida, Texas and every other state covered by the Voting Rights Act that has recently passed similar new polling place Photo ID restrictions. The only question is whether the U.S. Justice Department will abide by the responsibilities imposed by the Voting Rights Act, or, as has become all too commonplace under the Obama administration, turn a blind eye to justice in the face of the hard-right noise --- and voter suppression --- machine.

UPDATE 08/09/11: Around 50 people attended a rally against SC’s photo ID law held at the International Longshoremen’s Assoc. Hall in Charlestown, according to The Post and Courier.

Underscoring the significant roadblock imposed by the new law, Andrea Tangredi, a well-educated MA transplant, said she had "spent at least 17 hours online and in person since July trying to get a license here, only to face hurdle after hurdle tied to her several name changes" (occasioned by successive marriages).

UPDATE 08/17/11: The DOJ, which has not yet made a formal pre-clearance determination, ruled that South Carolina’s new photo ID law cannot be enforced for any elections this year.

Barack Obama has told Eric Holder to look ahead on torture, mass murder, and other crimes against humanity. Who really expects these jokers to give a damn about anybody's voting rights?

thanks for this article --- gives me a bit of hope! it has to be stopped EVERYWHERE.

The fact that these are likely to be reliable Obama voters might do the trick to interest a DOJ that is otherwise uninterested in representing the interests of these people.

AG Holder might be interested if the ACLU can show that the voter ID's can also be used to buy marijuana. That always gets Eric excited.

If the DOJ develops an interest based on "The fact that these are likely to be reliable Obama voters" then something is wrong with the DOJ IMO.

Gee, Steve, you're just noticing that there's something really, really wrong with Eric Holder's DOJ? They've been giving all your heroes a pass so far, for political reasons (and those political reasons sure don't involve motivating the people who voted for Obama), so why is it a surprise that they might be moved to do something to prevent wholesale disenfranchisement of the people most likely to vote for him next time? I'll admit that I haven't figured out how the enthusiastic pursuit of the War on Drugs(TM), which also disenfranchises many people one might have expected to vote for Obama, fits into this scheme, but my hypothesis is still a work in progress.

I wholeheartedly agree, WingNutSteve. The DOJ should not deny pre-clearance because these are voters likely to vote for Obama.

The DOJ should deny pre-clearance because they are required to do so by the provisions of the Voting Rights Act of 1965.

For the reasons I expressed in Prosecute or Perish, I agree with CambridgeKnitter. The Justice Department should have prosecuted your former heroes (Bush, Cheney et al.) for war crimes. They had a legal obligation to do so.

The President's "must look forward" formulation was pure sophistry designed for political expediency --- evasion of blow-back from the right-wing echo chamber.

Whether the Holder Justice Department will again ignore its legal obligation to enforce the Voting Rights Act out of fear of that same right-wing echo chamber remains the $64,000 question of the moment.

It is easy to criticize Obama for not going after Bush. I remember Rupert Murdoch's The Sun cover one day early in Barack's presidency when it said Obama's lover story. I never saw the title again.

It is a warning shot by the Military Industrial Complex. The same as JFK or MLK or RFK or Clinton or Pelosi. Since the 1960's H Bush/Cheney have controlled all politics in our country for financial profit. Rupert is their media controller now.

Go look at the 20 year profits of Bush's The Carlyle Group that is his part of the complex. It is normal under Clinton then exponential under W. They are absolutely stealing trillions from the US tax payers.

So be careful in your critcism of Obama. In real life a hitman will kill somebody for $1,000 or less. Just imagine what a person like Bush or Cheney would kill for $1,000,000,000. Just ask MLK/JFK/RFK killed by the biggest heroine dealers drug dealers at the time.

Thank God for the ACLU for having the guts to stand up to these criminals. Whenever the ACLU have a win over the Military Industrial Complex they get a retaliation from their Right wing echo chamber to get a listener to hurt them.

Ah, the Obama has a gun to his head excuse.

Does the threat of the military-industrial complex explain why President-Elect Obama picked Wall Street insiders like Geithner and Summers, as opposed to true progressive economists, like Krugman and Stiglitz, even before he entered office?

Does it explain why Obama privately met with lobbyists for the pharmaceutical industry and health insurance cartel but refused to permit single-payer advocates a seat at the table during the health care debate.

There is no hard evidence that any of the President's betrayals of "change we can believe in" were occasioned by a threat from the military-industrial complex. Moreover, if someone is so fearful that he/she would cower against the threat of the forces of reaction, he/she has no business running for the office of President of the United States.