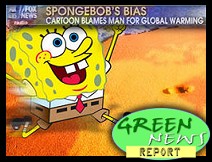 IN TODAY'S RADIO REPORT: The latest commie pinko hoaxster enemy of Fox 'News' is... Spongebob Squarepants!; Radioactive fish in VT; Salmonella turkey burgers everywhere else; Wolves under the gun in Wyoming; PLUS: The high cost of doing nothing about climate change ... All that and more in today's Green News Report!


Vermont Governor Peter Shumlin wants the 620 megawatts reactor shut in March 2012 when its original operating license was to expire.

Entergy filed a complaint in federal court to block the state from shutting the reactor next year.

« PREVIOUS STORY "Brad on KPFK: CA Dem Party Progressive Caucus Chair Karen Bernal on a Primary Challenge to Obama"
» Go to The BRAD BLOG front page «
"Mississippi E-Vote Failure Update: 'There is No Election at This Point; Everyone is Baffled'" NEXT STORY »

Brad, this news item from Vancouver weekly The Georgia Straight, might interest you.
http://straight.com/arti...-big-radiation-spikes-bc
EG:

The level of radioactive iodine spiked above the [Canadian] federal maximum allowed limit in the air at four of the five sites where Health Canada monitors levels of specific radioisotopes.

July was a hot month to say the least.

That presents a picture connected by the dots of reality.

Which the deniers seem unable to connect.