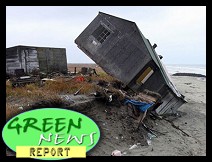 IN TODAY'S RADIO REPORT: Obama nominates a 'radical environmentalist' for Commerce Secretary?!?; FDA sued over antibiotic-resistant superbugs; No wildlands for YOU!; Killer cucumbers; PLUS: The Arctic is melting (see photo at right), yet the media is obsessed with Weiner (see photo everywhere else) ... All that and more in today's Green News Report!...


The head of the German public health body tackling a deadly E.coli outbreak says it may be months before it stops.
...
Mr Burger said German authorities had tried to balance risks when they wrongly blamed Spanish farms. He said the authorities had to act quickly - even though the conclusion later turned out to be wrong.