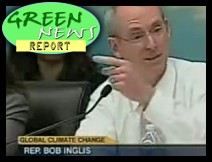 IN TODAY'S RADIO REPORT: BP made 'poor decisions' in the Gulf, says the National Obvious Commission; GM is back, baby!; Lame ducks and Lame Dems: No food safety bill for you, but BPA stays in your food supply...PLUS: A Republican blasts --- blasts --- Republican climate change deniers ... All that and more in today's Green News Report!

The offering, which raised $23.1 billion, is bigger and more ambitious than had once seemed possible. But the recently bankrupt automaker will have to build on its revival for the government to recoup its entire $50 billion investment and validate the Obama administration's decision to keep G.M. from collapsing.

INGLIS: Kim Beasley, who's Australia's ambassador to the United States tells me that when he runs into a climate skeptic, he says to them, "Make sure to say that very publicly, because I want our grandchildren to read what you said and what I said. And so, we're on the record, and our grandchildren, or great-grandchildren, are going to read.
...
And we're here with important decision to be made. And I would also suggest to my Free Enterprise colleagues - especially conservatives here - whether you think it's all a bunch of hooey, what we've talked about in this committee, the Chinese don't. And they plan on eating our lunch in this next century. They plan on innovating around these problems, and selling to us, and the rest of the world, the technology that'll lead the 21st century. So we may just press the pause button here for several years, but China is pressing the fast-forward button. And as a result, if we wake up in several years and we say, "geez, this didn't work very well for us....

They plan on leading the future. So whether you - if you're a free enterprise conservative here - just think: it's a bunch of hooey, this science is a bunch of hooey. But if you miss the commercial opportunity, you've really missed something.