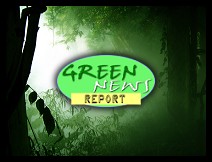 IN TODAY'S RADIO REPORT: Steppin' awaaay from the politics and midterm madness (almost...and just for today): Historic UN agreement on biodiversity; Establishing a price for "natural capital"; Halliburton's bad cement job; Last call for Discovery ... PLUS: Van Jones - The most positive man in America on the fight for clean energy ... All that and more in today's Green News Report!

They also agreed to take steps to put a price on the value of benefits such as clean water from watersheds and coastal protection by mangroves by including such "natural capital" into national accounts.

Services provided by nature to economies were worth trillions of dollars a year, the head of the U.N. Environment Programme, Achim Steiner, said in a statement, adding businesses from banks to miners were key in halting rapid loss of ecosystems.

« PREVIOUS STORY "What To Do If You Have Problems With an E-Voting Machine Today..."
» Go to The BRAD BLOG front page «
"Election Day Problem Report Wire..." NEXT STORY »

« PREVIOUS STORY "What To Do If You Have Problems With an E-Voting Machine Today..."
» Go to The BRAD BLOG front page «
"Election Day Problem Report Wire..." NEXT STORY »
See MSVL and support BRAD BLOG! Click here for signed premium version!