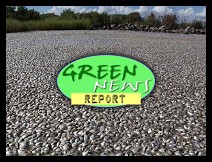 IN TODAY'S RADIO REPORT: Primaries are over - is an (even more) brain dead Senate in our future?; 2010 tied for warmest ever --- so make like the walruses and head to the beach! (Or like the denialists and put your head in the sand); Louisiana's river of dead fish ... PLUS: The really, really, really final stretch for BP's oil well? ... All that and more in today's Green News Report!

Many of the Senate candidates are signatories of the Koch Industries' Americans For Prosperity No Climate Tax pledge and the FreedomWorks Contract From America.
...
In reality, a carbon cap-and-trade market - by rewarding work instead of pollution - would increase jobs, lower electricity bills, restore American competitiveness, and forestall a climate catastrophe.

NO! The planet was NOT dying!
Almost everything else we could have easily agreed on both, non believer and believer.
If you believers had ust removed the CO2 killing the planet factor we could have all worked together without the spear-tip of FEAR constantly poking at our backs. Fear wasn’t sustainable for another 24 years and we wasted all that time when we could have been addressing the most important issue of all, over population. We should have acted more civilized than this environMENTAL CO2 mistake.
Let it be a lesson learned and now we can be real progressives and leave the moralizing and fear mongering with the neocons

Nice straw man ya got there, "Meme Mine". NO ONE is saying the planet is dying. So you can drop that fake argument.

We'll assume that you're sincere in your beliefs and are simply ignorant of the scientific data, rather than one of the many, many commenters who work for the climate change denial industry to sow Fear, Uncertainty and Doubt over the solid, global scientific consensus on human-caused climate change.

Again, Planet Earth will be fine. It's humanity and millions of species that live on it that are in danger.

There is a great deal of legitimate discussion on the over-population question around the web, but please don't conflate the two issues. Many scientists (the ones who actual know about this stuff) say that it's CONSUMPTION levels, NOT population levels, that are depleting the carrying capacity of the planet's systems too rapidly for the system to remain sustainable. The argument you are making is routinely twisted by climate change deniers as evidence that scientists wish to control human population - a flat-out lie.

That said, over-population --- rapidly depleting the planet's natural resources --- is a reality but wholly different issue from human activities altering the life support system known as our climate and oceans. Don't conflate the two.

The interaction of CO2 (and other greenhosue gases) with solar radiation is basic physics. The interaction of C02 with sea water is basic chemistry. The global scientific community (of which I presume you are not a member) says we are adding too much, too rapidly, faster than the Earth's systems can adjust to stay in the narrow zone of climate we have previously enjoyed, that made homo sapiens possible. If you believe you are in possession of superior data that overturns these conclusions, please get your evidence to the world's scientific community ASAP.

Even if humanity were to disappear tomorrow, solving your over-population fears, it wouldn't change the massive amounts of CO2 and other greenhouse gases that we've already dug up from eons of deep storage underground and burned like crazy, rapidly releasing back into the atmosphere.

Whether you personally believe the field data and the analysis from the world's scientists is your choice, but it doesn't change the data.

Please educate yourself (and get a good pre-bunking!) from the kind folks at SkepticalScience.com, who debunk ALL the denier arguments with actual scientific data and easy-to-understand explanations about the evidence and the gaps in the evidence, and links to the studies to further your education.

"Real progressives" use verifiable data and scientific evidence. Please consider doing the same, rather than "moralizing and fear mongering with the neocons".