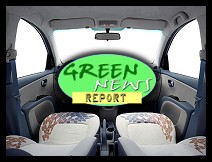 IN TODAY'S RADIO REPORT: New electric car...from South Korea, not us; Boulder wildfire now largest in Colorado history; Killing BP's oil well on hold while BP's blame game continues to continue, and the Interior Department blames itself ... PLUS: Obama calls for R&D tax credits for green development, but will the GOP play along? ... All that and more in today's Green News Report!

Now, we have a different vision for the future. See, I've never believed that government has all the answers to our problems. I've never believed that government's role is to create jobs or prosperity. I believe it's the drive and the ingenuity of our entrepreneurs, our small businesses; the skill and dedication of our workers --- (applause) --- that's made us the wealthiest nation on Earth. (Applause.) I believe it's the private sector that must be the main engine for our recovery.

But in the words of the first Republican President, Abraham Lincoln, I also believe that government should do for the people what they cannot do better for themselves. (Applause.) And that means making the long-term investments in this country's future that individuals and corporations can't make on their own: investments in education and clean energy, in basic research and technology and infrastructure.

« PREVIOUS STORY "Court Sides With Bush/Obama Administrations In Favor of Torture, Secrecy, Against Rule of Law"
» Go to The BRAD BLOG front page «
"Rabbis Call for Human Rights as Pre-Election American Islamophobia Intensifies, Quran Burning Called Off and The Donald Enters the Fray" NEXT STORY »