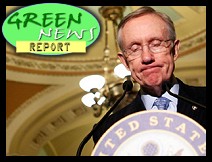 IN TODAY'S RADIO REPORT: A NEW gusher in the Gulf!; Dam bursts in Iowa, floods hit Chicago, heat wave in Kansas --- other than that, everything's fine!; BP's CEO gets his life back ... PLUS: Climate legislation in the Senate is dead --- really, really dead this time, says Harry Reid ... All that and more in today's Green News Report!

IN 'GREEN NEWS EXTRA' (see links below): As energy use goes, so goes the economy; On-again, off-again federal support for renewables cripples emerging industries in the U.S.; EPA Slams State Department on Proposed Oil Pipeline; Deep Underground, Miles of Hidden Wildfires Rage ...PLUS: 1/3 of U.S. to Face Water Shortages Due to Climate Change (with maps!) ...